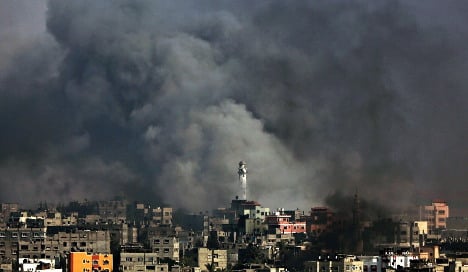 An Israeli strike on Gaza City on Monday. Photo: DPA

Ibrahim Kilani, his wife Taghrid , 47, and their children five children, aged between four and 12, died during the raid, Palestinian medical services said on Tuesday.

7 members of Kilany family were killed by Israeli airstrike hit Salam building in #Gaza city, all of them hold German nationally. #Germany

At least three other people in the Kilanis' building were killed and dozens more injured when the upper floor of a tower was hit, according to reports. The target of the attack remains unclear.

"Due to several indications, we must assume that this family is among the dead," said a spokesman from the German Foreign Office on Tuesday afternoon in Berlin. Deaths of German citizens abroad are only officially confirmed when an official or diplomat has seen the bodies.

More than 580 people have been killed so far in the fighting.

The Kilanis lived in the north-west of Gaza, but had moved to the centre of Gaza City before the air strikes in response to an Israeli evacuation request.

Germany's Foreign Office a few days earlier urged all Germans living in the Gaza Strip – mostly Palestinians with a German passport – to immediately exit the crisis zone. However, around 60 still remain there.

SEE ALSO: Man sets himself on fire at Israeli embassy