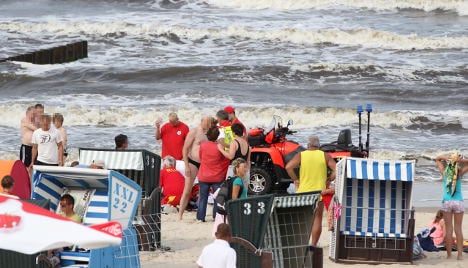 Lifeguards try to rescue a man on the beach in Ückeritz in northern Germany on Sunday. Photo: DPA

At least seven people died in Mecklenburg-Western Pommerania, four in Berlin and Brandenburg, three in North Rhine-Westphalia, two in Bavaria, one in Hesse and one in Lower Saxony.

The 19-year-old US student died on Friday in the Bavarian Allgäu after falling into a waterfall. A 23-year-old friend tried in vain to pull her from the water, a police spokesman said on Saturday.

The American and three locals had wanted to swim to the Buchenegger waterfalls in Oberstaufen. But while climbing a five-metre high cliff, the 19-year-old slipped and fell into the water.

The 23-year-old jumped in after her, but couldn’t help and had to be rescued himself, according to police. Divers recovered the body of the woman, who is believed to be from Tacoma in the state of Washington.

Her family has been informed. One man from her hometown said: "We are a community in mourning for a wonderful teenager."

And in Mecklenburg-Western Pomerania seven people drowned over the weekend while swimming.

A police spokesman in Rostock said that an eight-year-old boy was among the dead. He disappeared into the water while swimming on Sunday at Graal-Müritz on the Baltic coast. He died later in hospital in Rostock.

An 88-year-old man also died on Sunday swimming in a lake in Feldberger Seenlandschaft.

A husband and wife, both aged 59, died swimming off the beach in Rügen on Sunday. The couple from Bergen were found lifeless in the water.

And on Saturday a 46-year-old man from Hamburg who was on holiday at Hiddensee died in the Baltic Sea.

According to the German Life Guard Service (DLRG) 250 people drowned in Germany last summer in the holiday season from June to mid-August.

Men over the age of 60 are at particular risk, the DLRG said.

The heatwave is set to end with storms and cooler temperatures hitting the country from Monday, according to state weather service DWD.