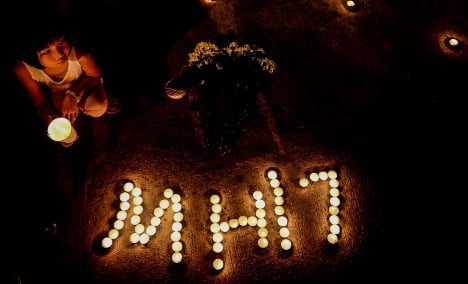 Fatima Dyczynski, 24, was supposed to start her new job on Monday at IBM in Perth. She had just graduated from university in the Netherlands and was flying to Australia.

The astronautical engineer studied at the University of Technology in Delft, and flowers were left outside the library in her memory after the crash.

The university said in a statement on its website that the bright student was “well known for her exceptional passion for space”.

In a video posted on YouTube in 2013, Fatima outlined her dream – to start a business which would make space accessible to everyone by using tiny satellites.

Fatima was the daughter of a Polish cardiologist who emigrated to Germany.

“The energy she emitted was just amazing,” a friend told Nine News.

“She was the most infuriating, confusing, energetic, loud person I knew. But most importantly, the most awe-inspiring,” one tribute on Facebook read.

'They were really in love'

Olga Ioppa, 23, from North Rhine-Westphalia, was a medical student at Iuliu Hatieganu University of Medicine and Pharmacy in Romania.

She was travelling to Bali for a five-week backpacking trip through Asia with her Canadian boyfriend Andrei Anghel when the plane was shot down. The couple met while studying together at university.

"It's a tragedy," Olga's professor told Bild am Sonntag. "Andrei and Olga were together for two years. They were really in love."

Anghel's sister told the Canadian media: "The last time I heard from them was on Wednesday. Just before the flight, Andrei wrote an SMS saying: 'Good morning, the next time you hear from me will be in Bali."

According to her Facebook page, Olga had previously worked at sports club TV Jahn Rheine 1885.

Ina Kroon lived with her husband in the Netherlands in a village called Woudrichem. The couple ran an opticians in the nearby town of Aalburg, according to Dutch media.

The husband and wife were going on holiday and both died on the flight, leaving behind their two daughters.

Gaby Lauschet, 48, was flying from Germany to her home in Australia when she boarded the Malaysia Airlines flight.

The kindergarten teacher worked in Sydney at the German International School, The Australian reported.

She had spent the school holidays visiting her mother in Aachen.

According to Bild, Gaby, who had a son, was planning to marry her partner in 2015.

One wrote: “She touched and brightened my/our life, the most selfless person I ever got to know.”