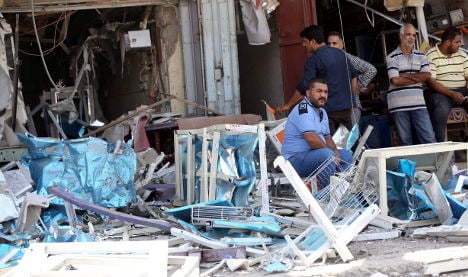 The remains of a cafe in Baghdad after one of the five bombings on Saturday. Photo: DPA

The man's German nationality was reported by Iraqi media on the back of a statement by ISIS.

The man had the warrior name Abu Al-Kaakaa al-Almani, but no further details were given about him.

The five bombings were one of the worst attacks in Baghdad this year by the Sunni terror group which has laid claim to huge areas of Syria and north-eastern Iraq. As well as the 24 dead, 70 people were injured, according to Iraq news site Al Mada.

Iraq's government is currently battling the Islamists north of the capital.

German security services believe around 300 Germans have gone to fight in Syria, many of them for Islamic extremist groups, but this is the first report of a German dying while fighting in Iraq.