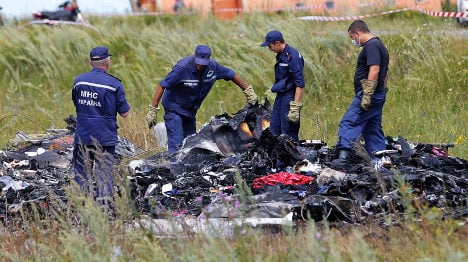 Rescue workers at the crash site. Photo: DPA
French President François Hollande and British Prime Minister David Cameron threatened Russian President Vladimir Putin with consequences when the EU foreign ministers meet on Tuesday after the shooting down of the passenger plane in eastern Ukraine, allegedly by pro-Russian separatists using a Russian surface-to-air missile.
A statement from the UK government following Cameron's call with Merkel and Hollande said: "They… agreed that the EU must reconsider its approach to Russia and that foreign ministers should be ready to impose further sanctions on Russia when they meet on Tuesday."
London, Berlin and Paris all said Putin must act immediately to give international investigators unfettered access to the crash area. Four Germans were among the victims, but Merkel has so far continued to take a softly, softly approach to Putin.
She spoke with him by phone on Saturday and after the call her office released a statement saying both agreed an international investigation was needed.
And on Sunday, while Hollande and Cameron increased their tone against Putin, the chancellor's office did not mention sanctions or action toward Russia, confirming simply that Merkel had spoken to several leaders including the Dutch, Australian and Finnish prime ministers as well as Cameron and Hollande.
The statement also said Merkel spoke again on Sunday to Putin and to Ukraine President Petro Poroshenko.
She called on Putin to use his influence to bring the rebels to the negotiating table, the statement said, failing to mention any consequences for Russia over flight MH17.
Germany has so far been reluctant to take strong action against Russia for its annexation of Crimea and its arming of rebels in eastern Ukraine. The two countries have strong trading and cultural ties. Germany also gets 36 percent of its gas from Russia.
'Russia needs us'
But on Sunday, Britain' frustration with its European allies, including Germany, which has failed to support stronger sanctions, appeared to be boiling over.
'For too long there has been a reluctance to face up to the implications of what is happening,' Cameron wrote in The Sunday Times.

"It is time to make our power, influence and resources count. Our economies are strong and growing in strength.

"And yet we sometimes behave as if we need Russia more than Russia needs us."

He added: "In Europe we should not need to be reminded of the consequences of turning a blind eye when big countries bully smaller countries… but we do."

He said some European governments saw the Ukraine crisis as a "problem to be managed and contained, not a challenge to be met and mastered".

So far the EU has imposed sanctions against companies and individuals but not against Russian industries.
US Secretary of State John Kerry called on the Europeans in several television talk shows on Sunday to follow the example of Washington and to tighten their sanctions.
He told CNN: "We hope that this will be a wake-up call for some countries in Europe that have wanted to sort of stand back and give this more time and worry more about the trade relationship.
"This is the moment of truth for Russia. Russia is supporting these separatists. Russia is arming these separatists. Russia is training these separatists.
"And Russia has not yet done the things necessary in order to try to bring them under control, which everybody believes they have more of an ability to do than they have exercised.”
Russian Foreign Minister Sergei Lavrov dismissed any responsibility for the tragedy and criticized reports which blamed Russia for the crash as "premature".