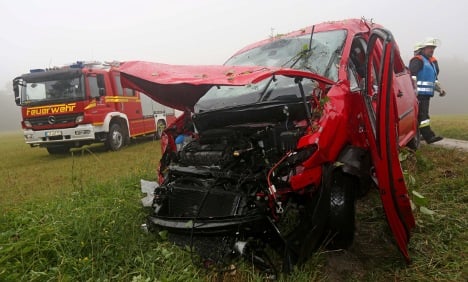 On late Wednesday afternoon, a group of hikers discovered a badly damaged Volkswagen in a wooded area at the base of the Staffelberg mountain near Bad Staffelstein in northern Bavaria.

The driver was nowhere to be found and emergency services were called to the scene. Two helicopters and several rescue vehicles combed the area for the missing person who was thought to be badly injured.

Police eventually located the driver, a 40-year-old woman, at her home. She had only bruises and scrapes from the 60-metre plunge. Likely in a state of shock after the fall, "she even activated the handbrake, removed the keys and exited the vehicle basically uninjured," Bad Staffelstein police said in a statement on Thursday. She then walked home and went to bed.

At the time of the accident the woman was searching for her missing 16-year-old son who often stayed on the mountain. Heavy rains obscured her visibility. "She became disoriented and drove over the edge of the cliff and into the abyss," police stated.

Her fall was cushioned 12 meters from the ground when her Volkswagen hit a pine tree. "The tree bent like a seesaw, bringing the car gently to the ground at the side of the cliff," officials reported.

The woman reportedly made an appointment with her lawyer the next morning to discuss the incident. She is now under investigation for leaving the scene of an accident without authorization.