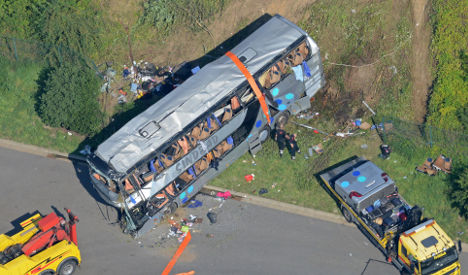 The crash happened around at 2am on Saturday on the A4 motorway that links Poland and Germany.

Eleven people died, according to police, and there were several serious injuries.

Police have identified the 11 dead as Polish nationals. The injured were rushed to nearby hospitals.

Early indications show the Polish coach crashed into a Ukrainian coach in front of it, skidding across the motorway. Dresden's mayor Helma Orosz said: "My thoughts are with the families of the victims and with those injured."
.
According to Polish travel company Sindbad, which operates the coach, there were 65 passengers on board and three crew. The majority were Polish. It added the coach was last inspected on July 8th and said that the coach's two drivers, aged 38 and 48, were both experienced.

Police blocked the motorway in both directions while the clear-up took place.