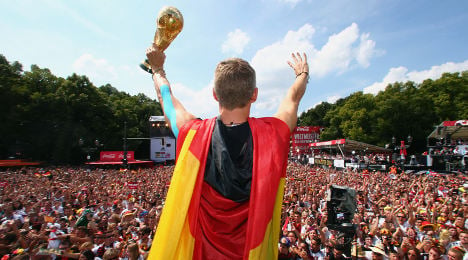 With the superb winning goal in the World Cup final, 22-year old Götze has become one of the most marketable players on the planet.

His role in the victory will propel him to the lofty heights of football fame which will see his face plastered on billboards around the world as lucrative sponsorship contracts are thrown his way.

Aside from financial success, his World Cup win may also bring a more prominent role with club side Bayern Munich in the forthcoming season.

He joined last season for €37m from arch rivals Borussia Dortmund and lifted the Bundesliga trophy  for the second time in his short career, but he did not always make the starting 11.

For a player so young, club manager Pep Guardiola must nurture his talent and ensure he remains grounded amidst the post-World Cup frenzy.

For years the future hopes of German football have been tentatively pinned on Götze's shoulders, and his World Cup winning performance will now help him on the way to fulfilling his destiny.

The talismanic leader of the German side, Lahm joins Fritz Walter, Franz Beckenbauer and Lothar Matthaus as a World Cup winning captain for Germany.

He recently committed his future to club side Bayern Munich with a two-year extension to his contract which will see him remain in Germany until at least 2018, and he will look to remain the linchpin in the Bavarian side.

“It is definitely my last contract and I will see out my career with FC Bayern. This is what I always wanted. I’m extremely pleased and happy about this,” he said after signing.

Transformed into a midfielder by Guardiola last season, Lahm's best position was a hotly debated topic in Brazil, with the versatile player deployed in front of the back four and also at right-back.

Leader Lahm will play where he is told and will hope to continue to enjoy success for club and country.

Winner of the Golden Glove at the World Cup and regarded by many as the best keeper on the planet, the Gelsenkirchen-born player will now look to cement his role as one of the greatest ever keepers.

With Gianluigi Buffon of Juventus and Petr Cech of Chelsea into the twilight days of their respective illustrious careers, Neuer – already with a Champions League and World Cup to his name – will be aiming to join the pantheon of esteemed goalkeepers which are regularly listed as the true greats of the game.

He will stay with Bayern Munich and continue to be the stalwart of their era of dominance, but he should not be complacent.

Borussia Dortmund’s Roman Weidenfeller is a tremendous backup option to Neuer for the national side and Neuer may also have one eye on the progress of Barcelona’s new signing Marc-Andre ter Stegen.

The promising young keeper is one for the future and if he impresses for the Catalan side then Neuer’s divine right to the number one strip for Germany could be under threat.

Labelled as the stand-out defender at the World Cup, the Borussia Dortmund player has attracted a host of prospective suitors as a result of his dominant displays at the finals.

Manchester United lead the pack of clubs chasing his signature, and Barcelona are rumoured to be interested in his services, but the player has remained tight-lipped on his future.

Hummels joined the ranks of footballers on social networking site Twitter before the World Cup, and after the final win he began tweeting in English, fuelling speculation in the press that a move to England may be on the cards. But this evidence is too flimsy to assert anything from.

Back in May, Hummels declared that he was “100 percent happy” at Broussia Dortmund, and with a contract that runs until 2017 it would take a big bid to take Hummels from The Westfalenstadion.

The Schalke defender was an ever-present for Germany at the World Cup playing out of position as a left-back.

For his club, Höwedes plays as a centre back and has been linked with a move to Arsenal this summer where he would be able to link up with international team mate Per Mertesacker.

Rumours of a move to Bayern Munich in 2013 led Schalke to offer him an extension to 2017, but a move this summer to Arsenal is not totally out of the question with the Gunners searching for a centre-back.

The best defender on the pitch during the final, the Bayern Munich regular is highly likely to remain with the side after signing a three-year contract extension in December last year, tying him to the club until 2018.

His unsuccessful spell with Manchester City in 2010 may deter Premier League clubs from signing him, making a Munich stay all the more likely, especially after club defensive partner Dante's disastrous World Cup cameo for Brazil.

Kramer’s nasty blow to the head in the early stages of the final led to the midfielder admitting afterwards that he “can’t remember anything” of his first ever start for the national side.

Contracted until 2017 with Borussia Mönchengladbach, the 23-year old is in the formative years of his career and would do well to remain with Mönchengladbach where he is guaranteed first-team opportunities.

But as with any promising youngster in the German top-flight, expect the big clubs to be sniffing around this talented prospect.

He was the epitome of Germany’s hard-working and devastatingly efficient winning side and was at the heart of everything they did in defence and attack.

The midfielder has been linked with moves away from Bayern Munich in the past, particularly to Manchester United in recent years, and with two years remaining on his contract Bayern will be keen to tie down a player who offers so much to the team.

He last signed an extension in 2010 and will surely open negotiations over a new deal now the World Cup has concluded.

After signing his previous deal, he displayed his loyalty by stating: "I’ve said often enough that I want to win the Champions League.

But the question for me is this: is that better with Real Madrid, Inter, some other club – or with Bayern Munich? I think I’ve answered that question clearly and unmistakably. We can achieve a lot here."

"We’ve finished the World Cup in the best way possible. Now I’m going to Madrid, so that’s two dreams achieved," exclaimed a joyful Kroos on the pitch after the final. With a year to run on his contract at Bayern Munich, Kroos is set to depart for Spain after an excellent World Cup.

He is expected to sign a deal that will earn him €12m per season, with Bayern picking up €30m for the player.

At Madrid, he has the mouth-watering prospect of being the creative midfield brain tasked with launching attacks behind a front-line of Karim Benzema, Cristiano Ronaldo and Gareth Bale, with rumours also suggesting fellow World Cup star James Rodriguez could move to Madrid.

He has accomplished everything he could have wished for with Bayern, so a new challenge in a different league could help the player to continue his development into one of the best midfielders in the world.

His club-record move to Arsenal last summer heralded a new era of spending for the Gunners, and he hit the ground running at the Emirates with a series of impressive displays.

But as the season drew on, Ozil failed to have the impact which he had in the beginning.

Some thought the pressure of a big-money move was getting to him, others believed he was tiring from a debut season in one of the most physical leagues in the world.

But Löw kept faith with the FA Cup winner and guaranteed him a place in the starting line-up at the World Cup.

He was impressive again, if a little subdued, and will return to England ready to push on in the new Premier League season aiming to add to the silverware he won last year.

He will be buoyed by his club side signing the attacking talent of Alexis Sanchez from Barcelona, and also by the rumours linking compatriot Sami Khedira with a big-money move to join him in London.

The veteran striker signed a fresh one-year deal with Serie A side Lazio in May, ending speculation surrounding a move to Germany and the USA’s MLS, but uncertainty now surrounds his position in the national side.

In his fourth World Cup, the Polish-born 36-year old overtook the Brazilian Ronaldo to become the tournament’s top ever goal scorer.

With a World Cup win now under his belt, Klose must decide on his international future. When the next World Cup campaign begins in Russia four years from now, Klose will be 40 years old and is likely to have retired from the game.

A more achievable target could be the European Championships in two years time, but this could still be too optimistic for a player who may choose to bow out of international football on the highest of highs.

The Chelsea forward was utilized from the bench in Brazil, but he made a tremendous impact when brought on and could count himself unlucky not have been handed a starting berth for the final.

But Kramer’s misfortune at being withdrawn early on handed him a chance to showcase his talents on the biggest stage football has to offer, and he took it by setting up the winner in extra-time.

Last summer, the player left Bayer Leverkusen for London side Chelsea for €23m. He enjoyed a promising first season in the Premier League, but found it difficult to break into the first-team on a regular basis. The 23-year-old showed potential in the opportunities he was given – the highlight being a hat-trick against Fulham – and will join up with Chelsea’s pre-season European training camp filled with the confidence of a World Cup win.

With competition for a starting place at Chelsea as fierce as it is for the German national side, Schürrle will again have a fight on his hands to prove his worth this season.

Another of Germany’s exceptional performers, the Bayern Munich player’s consistency is a marvel. He extended his contract with the Bavarians by two years until 2019 and upon signing it he said: “FC Bayern Munich has been my club since 2000 and will remain my club in the years to come.”

He remains absolutely devoted to Munich and it would take a dramatic turn of events and an exorbitant amount of money to tear the player away from Guardiola's side.

The mastermind of Germany's win, Jogi signed a contract extension in October 2013 to ensure he remains in charge until after the 2016 European Championships in France.

His World Cup win will bring interest from the world's top sides, but the German feels that Germany's era of dominance has only just begun, and he wants to be at the helm until at least 2016.