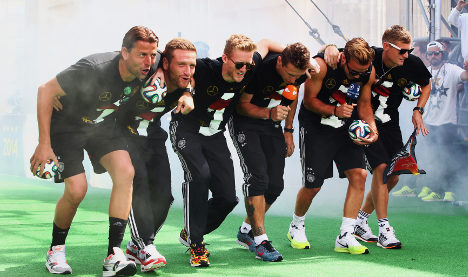 Niersbach said in a statement that a dance and song by six members of Germany’s World Cup winning side during their victory parade in Berlin on Tuesday was not meant to be “disrespectful in any way” to Argentina.

The players were accused of mocking Argentina by performing a taunt often seen in stadium stands.

"This is how the gauchos [Argentines] walk, the gauchos walk like this," they sang, hunched over, to cheers from the crowd.

In a country where strident patriotism is still largely taboo, newspapers said the young players' "tasteless" victory dance on Tuesday reflected badly on the country.

But Niersbach said in the statement: “I know from Oliver Bierhoff [team manager] that the idea came spontaneously to the players out of emotion and joy [from winning the World Cup].

"They are all absolutely decent and fair sportsmen who wouldn't make fun of anyone. They simply wanted to celebrate with the fans.

"I’m sorry if this has come across wrongly and been misunderstood by anyone."

Niersbach added he would write to his Argentine colleague Julio Grondona to make it clear that the dance was not meant to be “disrespectful”.

“We have the utmost respect for Argentina, great relations with their association and we look forward to seeing them again soon at the match in Düsseldorf,” he added.

In Argentina, the term gaucho refers to the cattle ranchers dispersed throughout the Pampas, or grasslands. Traditionally nomadic people, they are often considered the South American equivalent of a cowboy.

Nowadays it's also popular for musical groups and sports teams to dub themselves as gauchos.

Several German newspapers called the display of swagger before the world's media a sour note after an otherwise pitch-perfect World Cup.

"The victory celebration at the Brandenburg Gate turned into a gigantic own-goal," the conservative daily Frankfurter Allgemeine Zeitung fumed.

"With a mean satire of the opponents in the final, the German world champions are squandering the image of an open-minded, tolerant nation."

Berlin's centre-left Tagesspiegel called the display "tasteless" and said it overshadowed the team's gracious behaviour on the pitch in Brazil.

"The German modesty is over. Their joy wasn't enough, they only find full satisfaction when they torture their mourning vanquished opponents a little," it said.

"Maybe that is what will remain in the heads of many people outside Germany from this World Cup. And then the frenetic applause of the audience. They didn't mean anything by it, that is probably true. But they showed that in football there are not only fools but damned fools."

The criticism sparked a lively debate in English and German on Twitter under the hashtag #gauchogate, with many attacking what they saw as political correctness run amok.

Who cares?! They won so let them party! #gauchogate #Weltmeister

Welt newspaper said the dance did not mark a "shining moment" but added: "We don't need to overplay it."
What do you think? Was the dance a step too far? Leave your comments below.