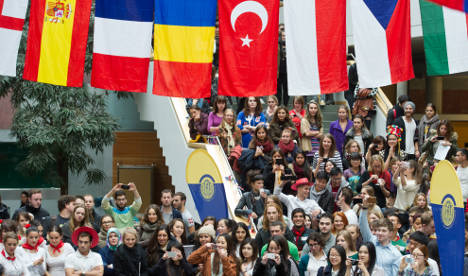 Only the USA and United Kingdom can boast more foreign students, the study from the Education Ministry and German Academic Exchange Service (DAAD) found.

Engineering degrees and master’s programmes were the most popular courses, the report said.

“Excellent education needs international exchange and the basis for that are universities which are open to the world and in which everyone from professors to administrators to students provides a welcoming environment,” she said.

DAAD President Margret Wintermantel said: “The international attractiveness of higher education and research locations is measured by how many foreign students are attracted to a country. The fact that so many of them remain shows that Germany is attractive for talent from around the world.”

In 2013, around 30 percent of Germany's foreign students were from Asia and more than 55 percent were from Europe.

Around six percent hailed from the North America, like California-born Omar Sadik, 27, who is currently doing a master's degree in Global Studies at Humboldt University in Berlin.

“I disagree with the idea of commodifying knowledge and education,” said Sadik, who cited high costs of university education in the USA for choosing Germany.

He also considered attending university in Sweden, but decided against it after universities began charging higher tuition for foreign students.

“For me, the only country at the moment with a respectable education system that is also affordable for non-EU students is Germany,” he said.

While students may not be paying high tuition fees – semester fees at Berlin's Humboldt University total €287 and include unlimited access to public transportation – they are still pumping money into Germany's economy.

According to the study, foreign students spent €1.5 billion in 2011, producing tax revenues of €400 million.

Some cities, like Berlin, recognize the financial contributions made by incoming students and thank them in advance. The city provides €50 in “welcome money” to students registering a local address for the first time.

Although Sadik has just begun his two-year degree, he is already considering remaining in Germany to carry out a PhD or find a job. “Of course it's not only about money, it's about opportunity,” he said. “Germany could definitely offer organized research and work options for me after I graduate.”

SEE ALSO: The student dream? Make me a bureaucrat