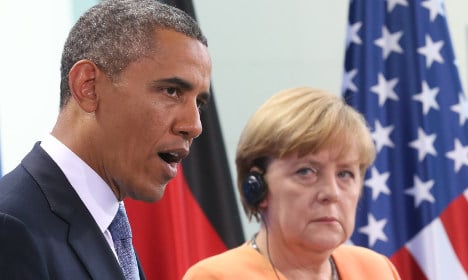 And while the United States remained relatively popular across the world, the Pew Research Center said it found widespread opposition to US eavesdropping as well as to the Pentagon's use of drones overseas.

Obama's overall favorability numbers globally have changed little since 2013 in the 44 nations surveyed, with a median of 56 percent expressing confidence he will "do the right thing in world affairs," according to Pew's sweeping survey of 48,643 adults in 44 nations.
But he suffered a stark drop in Germany, Russia and Brazil, three nations where tensions with Washington have soared over the past year.
"Revelations that Washington systematically reads both Americans' and some foreigners' emails and listens in on their telephone conversations appears to have significantly damaged Obama's approval in only one European Union country: Germany," Pew reported.
Berlin, a key Washington ally on several fronts including anti-terrorism cooperation, was outraged last October when it was revealed that US spy agencies tapped the mobile phone of Chancellor Angela Merkel.
The row escalated this month amid new revelations that German nationals were arrested on suspicion of spying for the United States, prompting German authorities to order the expulsion of the Berlin CIA station chief.
Germans' confidence in Obama dropped to 71 percent, seventeen points down from last year.
Half of Germans (51 percent) said they still saw the US in a positive light. That figure was down two percent on last year but up from a record low of 30 percent in 2007.
The US reputation for protecting individual liberties also appears to have taken a hit in the wake of former National Security Agency contractor Edward Snowden's damning revelations about the extent of US surveillance.
"In 22 of 36 countries surveyed in both 2013 and 2014, people are significantly less likely to believe the US government respects the personal freedoms of its citizens," the report said. In Germany, the number fell 23 points to 58 percent.
US drone strikes are also being increasingly opposed, including in Nato ally nations like Britain, France and Spain, according to Pew.
In 37 of 44 surveyed countries, half or more of the public disapprove of drone attacks. In Germany, 67 percent were opposed to drones and 30 percent in favour.