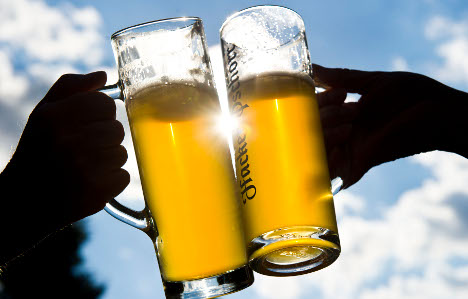 Police in Krefeld in North Rhine-Westphalia said on Tuesday afternoon they were looking for the burglars who stole multiple palettes of beer from a warehouse. The amount is said to fill 10 trucks, the equivalent of approximately 300,000 litres.

"Who has noticed a large amount of beer?" police asked in a statement.

Sometime between 5pm on Thursday and 12pm on Monday, the perpetrators pried open the garden gate and entered the site through the front entrance of an office building which led to the warehouse.

They then loaded large trucks with palettes of beer, returning on several occasions within short intervals, police stated.

Witnesses reported seeing "suspicious" trucks loaded with cargo in the vicinity as early as last Thursday, although the theft was not discovered until Monday afternoon.

The vehicles were spotted driving down the Autobahn 40 in the direction of Duisburg, where police suspect the cargo was unloaded.

With beer in bars and restaurants costing around €3.50 for half a litre, the haul would be worth €2.1 million at bar prices.