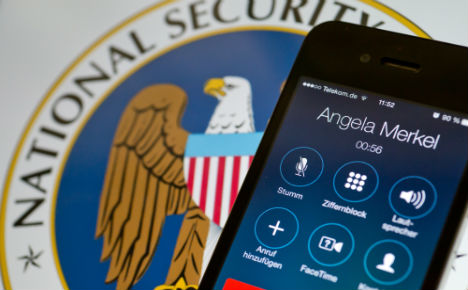 "The thing we always have to keep in mind when we are working together is if the person across the table is possibly working for someone else at the same time, that for me isn't a trusting relationship," she told German ZDF television in a pre-recorded interview.

"Here we obviously have different points of view and we need to talk to one another," Merkel said, adding that she had "naturally hoped for a change" in Washington's behaviour.

The shock move to kick out the US intelligence chief on Thursday followed the emergence of two alleged spying cases within days of each other, re-igniting German fury already on a low boil from another spying scandal last year in which it was revealed that Washington was monitoring Merkel's phone.

In the latest case, German police on Wednesday searched the Berlin-area home and office of a man who, local media reported, is a German defence ministry employee accused of passing secrets to the United States.

A week earlier, a 31-year-old German BND foreign intelligence service operative had been arrested on suspicion of having sold over 200 documents to the CIA.

While Merkel was critical of how the US intelligence services had behaved, she expressed the hope that the damage could be repaired.

"We no longer live in the Cold War era where everyone is suspicious of everyone. I think the secret services in the 21st century should concentrate on important issues," Merkel said. "We work very closely with the Americans and I hope that will continue."

In recent days, Washington has hinted at its displeasure with Germany's decision to respond in a highly public manner by expelling the CIA's Berlin chief — an unusual display of fury by Germany towards its ally.

On Friday, White House spokesman Josh Earnest, who previously declined to go into detail about the row because it touched on intelligence matters, offered an insight into US thinking.

"Allies with sophisticated intelligence agencies like the United States and Germany understand with some degree of detail exactly what those intelligence relationships and activities entail," Earnest said.

"Any differences that we have are most effectively resolved through established private channels, not through the media."

The scandal has also seen the chancellor come under political pressure at home, with many Germany politicians urging a strong response.

She repeated, however, that the espionage affair would not jeopardise negotiations between Berlin and Washington over a transatlantic trade deal.

German Foreign Minister Frank-Walter Steinmeier reacted to the scandal by saying he wanted a revived partnership with Washington, based on "trust and mutual respect".

He pledged to begin rebuilding confidence at a meeting with Secretary of State John Kerry in Vienna over the weekend.

Steinmeier has been one of a number of German politicians who has spoken frankly and openly about the espionage drama, in a way that appears to have
irritated Washington.

The two nations cooperate broadly on foreign policy and on intelligence matters, including on the vital work of trying to detect and disrupt terror plots.

Germany has in the past sought a "no spying" pact with Washington similar to US agreements with Australia, Britain, Canada and New Zealand, but the US government balked at a deal that could set a precedent for others.