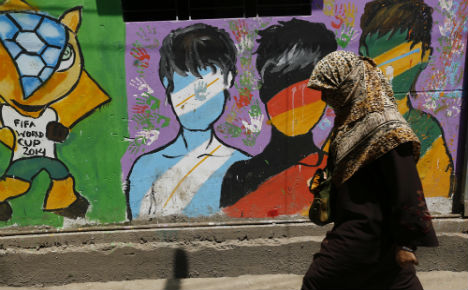 The massive flag was on display Saturday at a stadium in the western town of Magura, which the German charge d'affaires, Ferdinand von Weyhe, visited to pay tribute to the farmer.

"The 3.5-kilometre-long German flag circled the stadium four times and hundreds of people have turned up to see this amazing sight," said Ishrat Hossain, a German embassy spokeswoman.

She said Von Weyhe handed the farmer, 65-year-old Amjad Hossain, a life membership of the official fan club of the German national team, a football, a team jersey and a certificate of appreciation.

The farmer told AFP he became a German fan out of gratitude after he recovered from a gallbladder stone by taking homeopathic medicine made in Germany.

"I started making the flag after the 2006 World Cup in Germany. It was extended in the 2010 World Cup and in this World Cup I added more cloth. It's now 3.5 kilometre long," Hossain said. "The flag will be a success if Germany win the World Cup," he said.

Most Bangladeshis are fervent supporters of South American giants Brazil and Argentina and the flags of the two nations fly over many houses.

The South Asian nation got hooked on them in 1982 when television began broadcasting World Cup matches live nationwide.