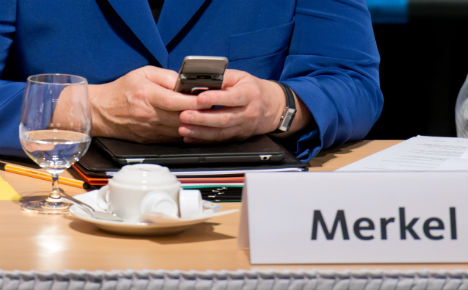 The White House however rejected suggestions the showdown over apparent US recruiting of double agents could damage broader ties with the Berlin government and cooperation on issues like Ukraine.

White House spokesman Josh Earnest, who has all week declined to go into detail about the row because it touches on intelligence matters, did offer a window into US thinking.

"Allies with sophisticated intelligence agencies like the United States and Germany understand with some degree of detail exactly what those intelligence relationships and activities entail," Earnest said.

"Any differences that we have are most effectively resolved through established private channels, not through the media."

Asked whether it would be fair to interpret his statement as a criticism of Germany's response to the row, Earnest said it was up to journalists to parse his meaning.

But privately, some administration officials have expressed frustration with Germany's angry reaction to the reported discovery that two government officials were working for the CIA and its decision to respond in a highly public manner.

The expulsion of the CIA's top agent in Berlin marked an unusual show of fury by Germany toward its ally, and came with Chancellor Angela Merkel under political pressure to respond to the latest in a string of disagreements over intelligence with the United States.

Earnest would not confirm that the CIA station chief had been sent home.

But he said Washington did understand the importance of the matter, amid criticism in Germany that the US response has been lacklustre.

Also, he said Washington, "as a matter of course, respects the German government's wishes regarding the accreditation and presence of US diplomats in Germany."

The scandal, which follows German complaints that the National Security Agency (NSA) tapped Merkel's cell phone and over mass US Internet and telephone data sweeps, has whipped up considerable criticism of the United States in German political spheres.

But Earnest argued that the row should not make it more politically difficult for Merkel to act on issues important to the United States — for instance toughening sanctions on Russia over Ukraine, which has been a tough sell in Germany.

"The reason that there is a strong ongoing national security and intelligence-sharing relationship between the United States and Germany is not because Chancellor Merkel is doing a favor for anybody in this country," he said.

"She is doing that, and she is committed to that relationship as strongly as President (Barack) Obama is, because it's in the best interests of the country that she was elected to lead."

Earnest said that Obama found Merkel to be an effective partner because she identifies the national interests of her country but can also work in a collaborative fashion with other nations.

"The president is fond of her not just personally but because of the professionalism that she deploys in the conduct of her job."

German Foreign Minister Frank-Walter Steinmeier said earlier that he wanted a revived partnership with Washington, based on "trust and mutual respect."

He pledged to begin that work with a meeting with Secretary of State John Kerry in Vienna at the weekend.

Steinmeier has been one of a number of German politicians who have been speaking out frankly and openly about the espionage drama, in a way which appears to have irritated Washington.

The two nations cooperate broadly on foreign policy and on intelligence matters, including on the vital work of trying to detect and disrupt terror plots.

The US government has said it has worked through law enforcement, diplomatic and intelligence channels to seek an "appropriate" resolution to the row with Germany.

Germany has in the past sought a "no spying" pact with Washington similar to US agreements with Australia, Britain, Canada and New Zealand, but the US government balked at a deal that could set a precedent for others.