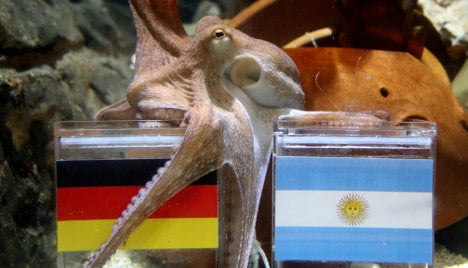 Little Paul the Octopus went for Germany in his aquarium in Oberhausen on Friday. Photo: DPA

At first glance, the statistics would favour an Argentine victory on Sunday night. In 20 meetings, Germany has won just six and lost five, while Argentina has won nine times.

But in the six times the teams have met in World Cups, Germany has lost just once – the 1986 final.

In the last three World Cup meetings, Germany has prevailed, winning in the 1990 final and the quarter-finals in 2006 and 2010.

“Lately, the Argentines have won the friendly games and we’ve won the competitive games. I’m hoping it stays that way,” president of the German Football Association (DFB) Wolfgang Niersbach said.

The first clash between the sides was in the 1958 World Cup in Malmö. Argentina opened the scoring against the defining champions, but Germany hit back through Helmut Rahn and Uwe Seeler to win 3:1.

In the 1966 World Cup, the teams met again playing out a 0:0 draw in Birmingham.

Germany scored their only victory on Argentine soil in 1977 in Buenos Aires, winning 3:1

Then, in 1986 they met for the first time in a World Cup final. Argentina won 3:2 thanks to goals from José Luis Brown and Jorge Valdano. Germany hit back with two to equalize, before Diego Maradona ended the German dreams.

In the 2006 World Cup quarter-final, the Germans won again, this time in a penalty shootout 5:3. Lionel Messi, 19, was on the substitutes' bench.

And in 2010, the sides met once more in the quarter-final, but this time things weren’t so close. The Argentinians were humbled 4:0 thanks to two goals from Miroslav Klose, one from Thomas Müller and one from Arne Friedrich. So, the World Cup history would favour Germany, but then again it favoured Brazil on Tuesday night.

And whoever loses will not have to wait long for the chance to get a small measure of revenge. The teams meet weeks after the final on September 3rd in a friendly game in Düsseldorf.