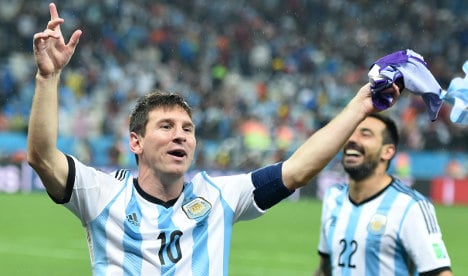 "Europe against South America – a juicy line-up," he said. "Argentina are defensively strong, compact, well-organized. "Offensively they have outstanding players like Messi and Higuain. We will prepare ourselves well and look forward to Rio."

Argentina and the Netherlands could only serve up a few cold crumbs of excitement over 120 minutes on Wednesday, following the football feast of Germany’s 7:1 drubbing of Brazil on Tuesday.

Neither side managed to create clear-cut chances, and little the German players saw, watching the match from their World Cup resort, would have struck them with fear for Sunday.

Argentina's star player and captain, Lionel Messi, did not touch the ball in the Dutch penalty area for 120 minutes.

With the score still 0-0 after extra-time, Argentina went on to win 4:2 on penalties thanks to their goalkeeper, Sergio Romero, who saved two of the Dutch efforts.