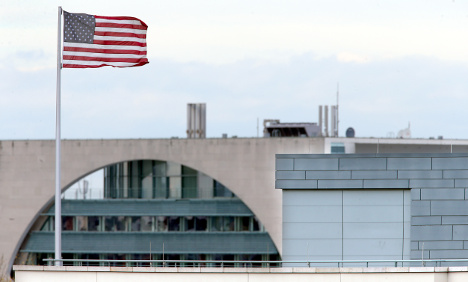 The roof of the US Embassy in central Berlin. Photo: DPA

The chairman of the parliamentary committee which oversees the secret services, Clemens Binninger, announced the expulsion of the US intelligence agency's station chief in Berlin on Thursday.

German government spokesman Steffen Seibert later said the spy chief had been ordered to leave. "The representative of the US intelligence services at the Embassy of the United States of America was asked to leave Germany," he said.

“The request was made in light of the ongoing investigation by the Attorney General as well as the months of unsolved questions around the activities of US intelligence agencies in Germany.

“The Government takes these acts very seriously. It remains essential for Germany, in the interest of the security of its citizens and its forces abroad, to work closely on a basis of trust with Western partners, especially the United States.

“But for that to happen, mutual trust and openness are necessary.”

The security services committee met for a special sitting on Thursday following the unmasking of two alleged US agents in the German security apparatus.

US spying in Germany was flagged up in 2013 by National Security Agency contractor Edward Snowden, who said Washington had carried out major surveillance in Germany, including tapping Chancellor Angela Merkel's cell phone.
Merkel complained in person to US President Barack Obama about the incident last October.
During her visit to China this week, the chancellor also referred to the current slew of uncomfortable revelations, saying that "it would be for me a clear contradiction as to what I consider to be trusting cooperation between agencies and partners".
Binninger said the expulsion was  "a reaction to the long-lacking cooperation in efforts to get to the bottom of this affair".

This was the first significant action that is known to have been taken against the United States after a stormy few weeks of recriminations and public outcry over US intelligence activities directed against Germany.

On Wednesday, the Federal Criminal Police (BKA) searched the Berlin home of a reported army officer at the Ministry of Defence in an investigation into suspected intelligence gathering for the United States.

That case followed the arrest last week of an employee of Germany's foreign intelligence service, the BND, who allegedly sold more than 200 classified documents over two years to the CIA.

In a statement on Thursday afternoon, the US Embassy in Berlin said it had "seen the reports that Germany has asked US Mission Germany’s intelligence chief to leave the country".

"As a standard practice, we will not comment on intelligence matters," the statement said. "However, our security relationship with Germany remains very important: it keeps Germans and Americans safe.

"It is also essential that our close cooperation with our German government partners continue in all areas."

The US ambassador to Germany, John Emerson, was called into the German Foreign Office last week over the growing spate of spying scandals. He also had a meeting in the Foreign Office on Wednesday. It is thought to be the first time Germany has expelled a US spy station chief, although more junior operatives have reportedly been sent home in the past.

In 1996, a CIA officer attached to the US Embassy in Berlin was expelled after he was caught trying to obtain confidential information about German equipment sales to Iran’s nuclear industry.

The case was leaked to the press and the resultant outcry ensured that the officer was put on a plane back to the States, according to the US news website The Daily Beast.