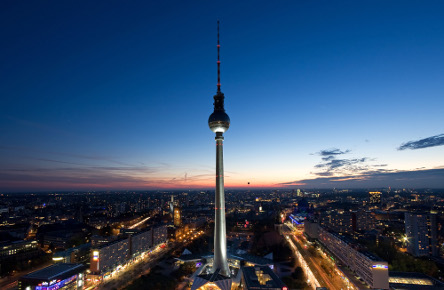 Berlin's TV Tower is a magnet for tourists and protesters. Photo: DPA

Members of the group bought admission tickets and rode the elevator 200 metres up the 368-metre tower and sat down on the floor of the café in the ball-shaped revolving observation deck.

Police arriving at the scene also went up for talks with the group, the Berliner Zeitung reported. Staff meanwhile closed the tower to all other visitors.

The protesters were from the same group of asylum seekers who occupied a former school building in the city's Kreuzberg district in June and early July. The tense stand-off with police lasted a week.

"We are refused everywhere we turn," the group said in a statement denouncing blanket indifference they say they have met from German officialdom.

"Years of waiting, being restricted to a camp, no working status, no right to education and no right to German language courses have made our lives unbearable," the statement posted on Facebook continued.

The conditions drove them to occupy the tower, they said. There was no indication how long the action would last. The world-famous TV tower has been the target or venue of various protests since it was completed in 1969.

In 2008, around 200 people in wheelchairs surrounded the tower in protest at its policy of not admitting wheelchair users or people with guide dogs.

In 2000, environmental activists from France's Basque region climbed 60 metres up a cable on the outside of the tower and affixed a mountaineering tent as part of Europe-wide protest over construction of a dam in their home region.