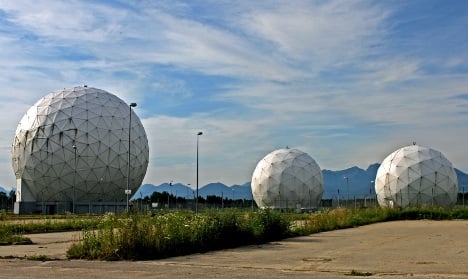 Disused NSA monitoring domes at Mietraching in Bavaria. The site was closed in 2004. Photo: DPA

When Defence Minister Ursula von der Leyen was recently pushed to justify why Germany needed to develop an armed European drone, she said something that cast light on a whole lot more.

"The NSA scandal has shown me once again what it means when you sleep through 10 or 15 years of technological advancement and then face the bitter realization today just how dependent you became on others."

The key words here are "sleep through" and "bitter". The first at least suggests some kind of better-late-than-never enlightenment, the second, an enduring state of negativity.

The latest twist in the NSA shenanigans and the news that a German BND foreign intelligence operative has been recruited by his US counterparts further underscores the chief dilemma in the German reaction.

The more vocal the official indignation, the greater the German helplessness becomes apparent.

"This is too much", "breach of trust", "full clarification", "consequences" –  every snort of fury inevitably peters out in the vagueness of the situation, because there is almost nothing concrete for Germany to go on that might furnish it with some muscle to push back at the Americans.

Nor would the Americans give much, if any, thought to some kind of mutual no-spying pact that would tie the hands of their intelligence services.

So what's left if this creeping process of double-crossing doesn't fuel anti-Americanism, and this supposedly unquestionable bond with the US sails through unchallenged again, as it usually has in the post-war period?

Germany's Realpolitik scarcely allows for much of a viable alternative to a transatlantic alliance.

Both sides reap solid dividends from their economic ties, and both remain dependent on close cooperation between their intelligence services as the threat of terrorism grows rather than diminishes. The return to Germany of battle-hardened jihadists from Syria and Iraq illustrates that clearly enough.

Bottom line: As Obama and Merkel know too well, their countries need each other in this respect and a collapsing relationship would itself endanger global security.

All fair in love and cyber war?

In the modern world, meanwhile, cyber warfare has long been the order of the day. Hackers can paralyze entire countries, sabotage infrastructure, delve into the depths of the armaments industry and much more.

Whether it is China, Russia, Israel, Britain, France or the United States, they are all in it up to their necks, sometimes aggressively, sometimes covertly. But the only real crime these days seems to be getting caught.

Jonathan Pollard, sentenced to lifelong imprisonment in the United States in 1987 for spying for the Israeli secret service, is still behind bars despite the efforts by Yitzhak Rabin und Benjamin Netanyahu to secure his release.

But does that taint or overshadow US-Israeli relations? Not one iota – the countries remain close allies.

So the ultimate message for Germany to take home after the slew of spying scandals is to verbally disarm and digitally arm, toughen up and get in the game.

Because once those outraged, puffed up political chests deflate, little will have changed except for Germany having played the buffoon once more.

Our intelligence services must finally be brought up to speed with the age we live in. And only when the BND is capable of looking the NSA right in the eye will Germany's objections to its current treatment be taken seriously.