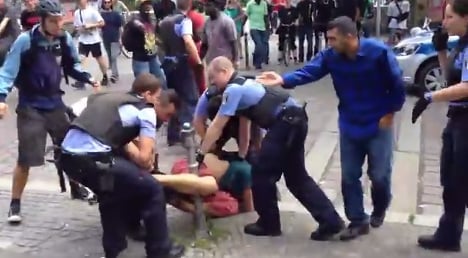 A video on YouTube shows the arrested man, who appeared to be wearing a red clown’s nose, being jumped on and beaten by police after they asked for his ID. Police said he was stopping them doing their job.

The man, who is walking along the street  with a woman, is asked by one policeman for his identification documents in the video. He is then kicked, punched and wrestled to the floor by the officers, provoking anger from a crowd and further violence.

By the end of the five-minute video, dozens of protesters have gathered around the officers and riot police have been called, while the man is still on the floor with three policemen on top of him.

One officer suffered a head injury when two bicycles were thrown at police in the aftermath of the arrest, Berlin police said in a statement on Monday, while another was bitten on the hand.

The statement said police were called just before 6pm to a fight involving 20 people in Görlitzer Park in the Kreuzberg area of the capital.

“Officers saw a 25-year-old injured man who was bleeding badly from his ear,” they said.

Police claimed protesters taking part in a demonstration then attempted to obstruct them in their duties.  "The video only shows part of what happened on Saturday," police said.

They added their officers were “repeatedly disturbed” in their work of trying to identify the people who were involved in the earlier fight. “The man in the video handicapped officers repeatedly,” they said.

They said the 22-year-old man was preventing them from investigating the fight and was “pulled aside” by officers before 60 people attacked the police.

The video, however, which had almost 225,000 views by Monday afternoon, shows the man being kicked and punched and his leg bent round a bollard by the officers, before demonstrators start to shout at police.

Two men aged 46 and 32 and a woman aged 33 were arrested on suspicion of causing grievous bodily harm, attempting to free a prisoner and serious breach of the peace, police said.