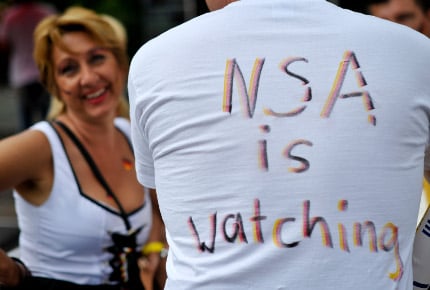 A Germany supporter pokes fun at US intelligence services during the 2014 World Cup. Photo: DPA

Following a spate of scandals where US agencies including the NSA targeted subjects in Germany – including the illegal tapping of Chancellor Angela Merkel's cell phone – the new case was one apparent double-cross too many, national and regional media said.

"Enough grumbling," Zeit Online commented on Monday. "The Federal Republic is not some kind of tin-pot state where hostile or allied intelligence services can do whatever they like.

"If – or rather because – the US government and its machinery are making a laughing stock of all notions of German-US friendship, then it's time to get tough," the paper wrote.

"The [new] spy scandal will be the acid test of German-American relations," Tagesspiegel newspaper commented, predicting that it can "atmospherically complicate other areas of extreme importance to both sides, such as negotiations on the EU-US free-trade agreement."

In a Spiegel magazine survey conducted amid the latest revelations, 57 percent of respondents now favoured "greater independence from the United States." And 69 percent said their trust in the US had recently plummeted.

The survey followed the news that an operative of the Germany's BND foreign intelligence service was arrested for allegedly selling more than 200 classified documents to the CIA.

The 31-year-old mole is believed to have been detected by German intelligence while attempting to sell more documents to the Russian Consulate in Munich.

Another 60 percent of respondents in the Spiegel survey, however, said they wanted "greater independence" in German relations with Russia, with another 40 percent calling for active closer cooperation.

Meanwhile, the Stuttgarter Zeitung on Sunday commented that the paltry sum of €25,000 that was supposedly paid for the 218 documents showed how casually the United States was prepared to gamble with its relations with Germany.

The latest spy scandal clearly showed US "disdain for democratic institutions and contempt for the smaller partner," the paper wrote.

"We now have the next confirmation that we are not such good friends as people would have us believe," agreed Tagesspiegel.

Describing the successive scandal as a "reputation meltdown for the BND", the Münchner Merkur on Sunday concluded that German intelligence operatives had now become "American poodles".

This latest breach of trust was too great to whitewash, the paper argued, saying it was the result of inaction by Merkel's "kid-gloved" government over earlier cases where US intelligence gatherers had targeted Germany.

"Is this all the thanks we get for the Attorney General not having responded with an investigation into the surveillance of millions of German citizens?" the paper asked.