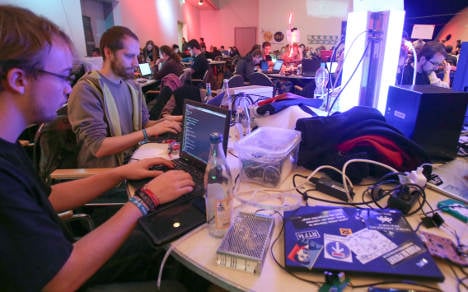 German hackers of the Chaos Computer Club at a meeting in Hamburg. Photo: DPA

Media reports on Friday said that an employee of Germany's foreign intelligence service is suspected of spying for Washington on a parliamentary panel probing US surveillance.

The federal prosecutor general confirmed that a 31-year-old German was arrested Wednesday on suspicion of acting for a foreign intelligence service, without specifying which one.

"At the present time we are issuing no further information on the proceedings," a spokeswoman for the federal prosecutor's office told AFP.

But several German media outlets said the suspect was working for a US intelligence agency.

The news came as fresh outrage spread over reports the US intelligence agency had been targeting Germans who try to remain unknown online.

Sebastian Hahn, a student from Erlangen, Bavaria, helped run a server for Tor – a service designed to allow users to move through the internet without leaving identifiable data trails.

Excerpts from the NSA's programming code seen by ARD suggested the agency had hacked his server, recording all the connections to and from it in an attempt to find "potential Tor clients".

The agency noted every one of the hundreds of thousands of daily users accessing Hahn's server and saved their connections, according to the report.

This information was then used to filter out definite Tor users' IP addresses, which were saved in special NSA database.

Hahn has called the revelations "shocking." "It's a massive encroachment into my private sphere," he told ARD.

Other IP addresses found to be targeted by the Americans included some used by the hacker group Germany's Chaos Computer Club (CCC).

The CCC belongs to a group of privacy-conscious global internet service providers (ISPs) which said it would take British intelligence agency GCHQ to court over allegations it illegally accessed millions of people's private communications.

The complaint has been filed at a London court by the CCC together with American ISP Riseup and May First/People Link, GreenNet of Britain, Greenhost of the Netherlands, Mango of Zimbabwe, Jinbonet of South Korea and campaigners Privacy International.

They claim that GCHQ carried out "targeted operations against internet service providers to conduct mass and intrusive surveillance."

The move follows a series of reports by magazine Der Spiegel which claimed to detail GCHQ's illicit activities.

These reportedly included targeting a Belgian telecommunications company, Belgacom, where staff computers were infected with malware in a "quantum insert" attack to secure access to customers. Campaigners claim this was "not an isolated attack" and alleges violations of Britain's Human Rights Act and the European Convention of Human Rights.

"These widespread attacks on providers and collectives undermine the trust we all place on the internet and greatly endangers the world's most powerful tool for democracy and free expression," said Eric King, Privacy International's deputy director.

Meanwhile, critics said the German government is looking increasingly powerless against the capabilities of the NSA and British GCHQ.

The government's only answer had been to tell citizens to keep themselves safe online by encrypting their data, said Konstantin von Notz, Green MP and chairman of the German parliamentary inquiry into the NSA affair.

"And now we find out that the very ones who encrypt and use that are the ones being watched. That is perverse and insane," he told the broadcaster.

The news came on the day the German inquiry heard evidence from former NSA employees-turned-whistleblowers Thomas Drake and William Binney, who gave weight to serious allegations against the German intelligence service (BND).

Drake said the BND had become a "vermiform appendix of the NSA," referring to accusations it had been passing data on German citizens on to the American service – an act forbidden under Germany's constitution.

"The silence of the BND is terrible," Drake told the committee, and said people had a right to know what was going on. "You shouldn't wait for a German Edward Snowden to lift the veil."

"They want information about everything," Binney told the German parliamentary inquiry.