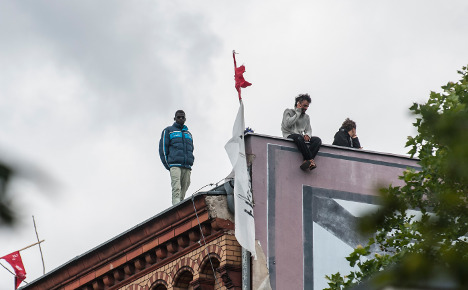 Hundreds of police officers put up a cordon last Tuesday around Ohlauer Straße while clearing around 200 refugees from the Gerhart-Hauptmann-Schule in Kreuzberg.

But around 40 people refused to leave the former school and the police barriers became a magnet for protesters. Kreuzberg’s ruling Green Party, which gave the initial order to clear the school and then dithered for days about their next move, also came under fire from both police and protesters.
District mayor Monika Hermann, who has supported granting the refugees residence rights for humanitarian reasons, pleaded for patience on Wednesday afternoon.
"It's the aim of all concerned parties to solve the situation in a peaceful way," she wrote in a press statement.
Finally, at 9.30pm on Wednesday the refugees still in the school signed an agreement with local authorities confirming they could stay in the building.

Under the agreement, brokered with the help of left-leaning veteran Green politician Hans-Christian Ströbele, 75, the former school will be renovated.

The 40 remaining refugees will be given special passes to allow them to leave and re-enter the school at will. Their passes will be checked at the entrance by security staff to avoid an influx of new people.

While they stay in the school, authorities have pledged not to start any legal proceedings of any kind against the refugees.

The renovation work, which according to the signed document will begin on Thursday morning, will start with the clearing out and securing the bottom floors of the school.

During the work the ground floor windows will be boarded up.

Police spokesman Stefan Redlich said he was relieved that the police had not had to use force to clear the school and that nobody had been hurt.

SEE ALSO: Berlin's refugee protest: 'This is a police siege'