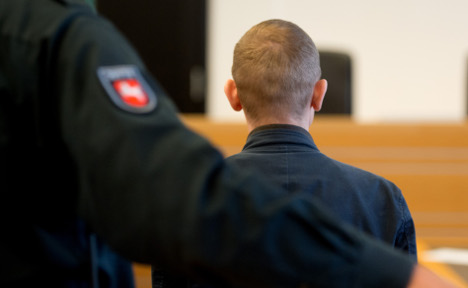 Marcel R. in the dock at the court in Hanover. Photo: DPA

The district court in Hanover sentenced the 31-year-old to two years and ten months in prison for fraud, forgery, assault, misusing a title, violations of medical practitioner law and driving without a licence.

Judge Renata Bürgel described Marcel R. as self-centred, ruthless and aggressive. “He had a great talent for manipulation,” she said.

The fake doctor from Saxony-Anhalt founded a children’s hospice in Hanover and treated several children with life-threatening illnesses, the court heard.

On one occasion the man injected emergency medication into a boy who was convulsing. The court viewed this as a form of assault. “He only wanted to help superficially and abused the trust of people,” the judge said.

The 31-year-old, who didn’t have a high school diploma, forged a medical certificate and claimed to have previously run a hospice.

Twin sisters he shared his apartment with were also used as medical guinea pigs. One was fed orange juice through a gastric tube. Both sisters were also violently attacked by him.

A psychiatric report found the roots of the man's bizarre behaviour lay in childhood.

He took refuge in an idealized, imaginary world due to a lack of attention from his parents, the court heard. “Through this escape he became an impostor,” the judge said.

The man stood motionless as the judgment was read out. The judge advised him to start therapy and pursue a medical qualification.

SEE ALSO: Pensioner evicted from own home for smoking