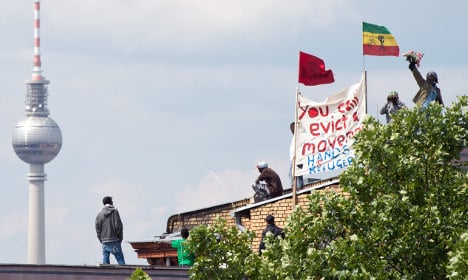 Refugees on the roof of the building. Photo: DPA

Berlin police chief Klaus Kandt sent an ultimatum to regional district mayor Monika Herrmann, initially for 7am on Tuesday, requesting that his officers be given permission to clear the Gerhart-Hauptmann-Schule.

On Tuesday afternoon that request came through.

Berlin Police tweeted: "For us that doesn't necessarily mean forced eviction. We will consider our next steps calmly."

But The Local's reporter at the scene said police began clearing protesters away with violence from the cordon outside the school shortly before 4pm.

He reported pepper spray being used and police putting on riot gear to get rid of demonstrators who were sitting down outside a cordon which has been in place around the former school for a week.

"They are wearing helmets and trying to clear protesters," he said. "They're blocking people from going into that area. An announcement was made telling around 200 demonstrators to leave as it was not a legal protest."

A female protester whose nose was bleeding told our reporter: "I'm so angry I can't even go home."

The chants also switched from being about refugees to criticizing the police. “Stupid policemen, murders and fascists,” was one of the chants.

By 4.30pm most of the demonstrators had been cleared.

Protesters read a statement by Hans Pannhoff, a local councillor, at 3.40pm.

Pannhoff confirmed he had asked police to clear school but only after negotiating with the refugees.
He demanded the refugees move to a different part of school building and was willing to let them stay if they do so.
But he said in the statement that there was only "a short window of time" for this to happen. "The statement was met with boos by protesters", The Local's reporter said.
Police shut down the area around the building last Tuesday after a handful of refugees refused to leave the former school which has been occupied by around 200 refugees for 18 months.