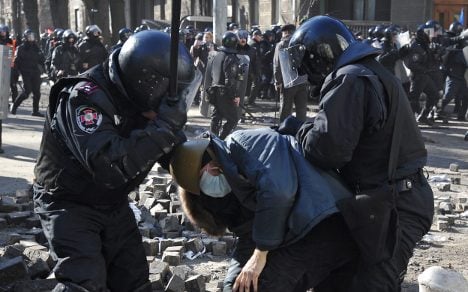 Riot police in Kiev during the demonstrations in February 2014. Photo: DPA

More than 100 people were killed in the protests which ousted Yanukovych.

The German training – which sometimes took place in Brandenburg outside of Berlin – focused on "action against crowds" and "searches" as well as "forcing entry to apartments".

Confirmation of this co-operation came from a ten-page government response to a parliamentary inquiry by the leftist Die Linke party, which was seen by Bild.

Further training was provided by the Germans in Poland and Ukraine ahead of the Euro 2012 football tournament and focused on dealing with violent or rowdy crowds, including self-defence, "fan group dynamics" and "preventative strategies for managing the police situation at football games".

This football crowd control training could just as well be used for violent clashes with demonstrators, Bild reported.

From the German side, the training came under the joint supervision of the Federal Police headquarters and the head of Germany's regional riot police, which report to the interior ministry.

The left-wing opposition has demanded full disclosure of the links between the German and Ukrainian police.

"The fact is the Ukrainian police were being trained under Yanukovych with German help," Klaus Ernst, vice president of Die Linke fraction, told Bild.

"All German activities in the Ukraine must be fully disclosed," he demanded.