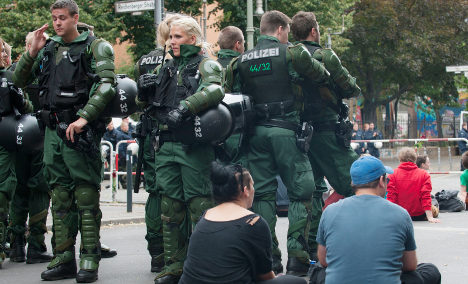 Police and protesters outside the Gerhart-Hauptmann-Schule in Berlin. Photo: DPA

On Monday at midday, the atmosphere on the corner of Kreuzberg's Ohlauer Straße and Reichenberger Straße was tense but quiet.

Police continued to block access to a former school, the Gerhart-Hauptmann-Schule, where around 40 people are holed up on the roof of a building which has been occupied by refugees for 18 months.

Inside the cordoned-off zone, streets were empty and many businesses closed.

Only residents who could identify themselves were allowed past police checkpoints. A driver claiming to own a small business in Lausitzer Straße had to turn his car around after a loud argument with several police officers.

Klara Iraki, who lives nearby, complained that she had been prevented from visiting a friend in Reichenberger Straße. She told The Local she did not understand why authorities wanted to move the refugees out. "The school has been empty for years," she said.

Iraki was also sympathetic of the refugees' situation. "They were already traumatized when they came here. I don't like how they're being treated," she said.

Posters and banners in the area were critical of the authorities. One poster demanded to let the refugees stay in the school. A third banner, lowered from a window in Reichenberger Straße, proclaimed: "The problem is called racism."

That view was shared by protesters sitting outside the Falken-Apotheke, a pharmacy just a few metres away from the police cordon. Part of a crowd of about 40 people, they said they had been there every day since 900 policemen blocked the streets last Tuesday.

"The police operation is excessive," said Conny, a member of the group who would only give her first name. The others agreed, while a young girl drew in a colouring book at their feet.

Conny questioned why police did not rule out clearing the refugees on the roof by force. "They [the refugees] will jump if there's an eviction," she said. The protesters also repeated claims made by the refugees in a statement on Sunday that some police officers had shown racist behaviour.

"They were watching us from another roof and waving, not only with handcuffs, but also with bananas," the statement said.

Petra and Thomas, two employees inside the pharmacy who preferred not to give their last names, were also critical of the police's behaviour.

Petra described an incident last Thursday when four people toppled a barricade outside the pharmacy.

"Police immediately got their batons and teargas out," Petra said.

Most days, she felt the protest resembled a funfair. "There are families with buggies, not radical people," she said.

"I would understand it if it were a dangerous situation," said Thomas about the massive police presence. "But this is being treated like a siege."

Both noted the effect the cordon had on local businesses. They had been unable, they said, to buy breakfast or lunch from their favourite snack bar across the street.

The cafe, located 50 metres behind the barricades, appeared deserted on Monday, its blinds closed and chairs stacked up in front of it.

Meanwhile, at cafes in surrounding streets, customers sat outside and enjoyed the sun.

He spent several hours inside the school on Sunday with a proposal from the local council and returned to hear their response, he said on his Facebook page.

"We hope for an agreement" with the authorities, said a man who gave his name as Muhammad Ali.

He told The Local he spent some time inside the school a few months ago after coming from Sudan, via Italy, to Germany. He returned to Berlin to support friends who were still in the building.

Asked whether he was optimistic a long-term solution would be found, he shook his head.

Another protester, Omar Amadu, had his own doubts: "This democracy is not a real democracy,” he claimed.

Amadu said he came to Germany six months ago from Niger, crossing the Mediterranean from Libya to Italy, and has since lived in Berlin without documents.

Berlin's top police officer told state lawmakers that police would only oust the refugees from the building if asked to by local authorities. But the head of the local police union has demanded the immediate clearing of the school.

Police cleared the vast majority of the around 200 refugees in the former school last Tuesday and Wednesday.

Gauck did not specifically address the situation at Gerhart-Hauptmann-Schule.