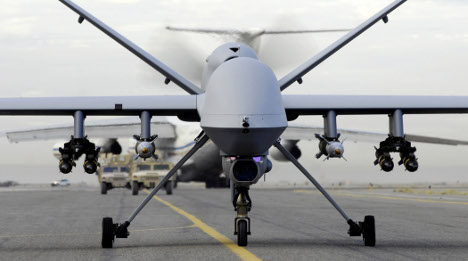 The Bundeswehr has been after the weapons for some time, in the hope they will further protect soldiers in war zones.

But Germany’s disastrous Euro Hawk drone debacle has made an already unpopular move even harder to sell to the public.

Before von der Leyen took charge, the defence ministry ordered Euro Hawk drones which did not have permission to fly in German airspace.

The scandal cost €600 million and left Germany without the remote-controlled weapons.

The Euro Hawk project was cancelled last May by von der Leyen’s predecessor Thomas de Mazière, but that has not dampened the military’s enthusiasm.

Minister von der Leyen is expected to state her position on Wednesday or Thursday.

Lieutenant-Colonel André Wüstner from the armed forces association said: “Rejecting long-range weapons endangers the lives of our own soldiers.”

But the Social Democrats (SPD), who sit in a coalition government with Chancellor Angela Merkel’s conservative bloc, appear reluctant to sanction drones for the Bundeswehr.

“I can’t say that we would necessarily support this,” SPD general secretary Yasmin Fahimi said on Monday in Berlin.

Before the elections in September, the SPD came out against armed drones and foreign minister Frank-Walter Steinmeier (SPD) said he did not expect a decision on them in this parliament.

Steinmeier's party colleague and defence committee chairman Hans-Peter Bartels, told the Berliner Zeitung the SPD remained sceptical. “I can’t see any scenario in which the German military would need combat drones,” he said.

The US military uses armed drones to target terrorist suspects in Afghanistan, Pakistan, Yemen and Somalia, said Bartels. “We find what the Americans do unacceptable.”