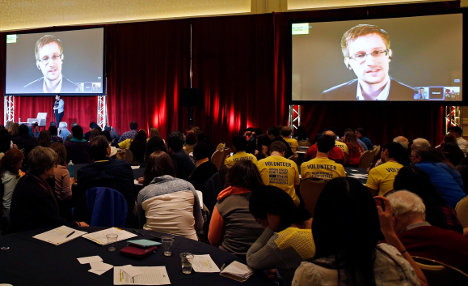 The parliamentary committee aims to assess the extent of surveillance by the US National Security Agency and its partners on German citizens and politicians, and whether German intelligence aided its activities.

Deputies from the panel voted to try to speak with Snowden before their next session on July 2nd, with a preliminary "informal" meeting in Moscow aimed at assessing how to proceed.

They said they would speak with Snowden's lawyer in the coming days to determine whether the American is willing to talk to them.

The vote came a day after Germany's federal prosecutors said they had opened a criminal investigation into alleged illegal US snooping on Chancellor Angela Merkel's mobile phone, in a move that could further strain ties with Washington.

Snowden, regarded as a traitor by US President Barack Obama's administration and the subject of an arrest warrant, has spoken via video link to other bodies including the Council of Europe from Russia, where he has received temporary asylum.

But while the left-leaning opposition had called for Snowden to be invited to Germany to testify, Merkel's conservative party voiced concern that such a move could damage US ties.

Snowden has indicated in interviews that he would prefer to speak to the committee in Germany and said he has more to disclose about NSA activities than has already appeared in the media over the last year.

A deputy from the opposition Linke, Martina Renner, said MPs from her party and the Greens would not make the trip to Moscow as they had no interest in "political tourist excursions", and renewed their call for Snowden to be brought to Germany.

Germans were outraged by revelations last year that the NSA eavesdropped on Merkel's conversations, as well as about wider US surveillance programmes of internet and phone communications.

Merkel is due to meet Obama on Friday at commemorations in France for the 70th anniversary of D-Day.