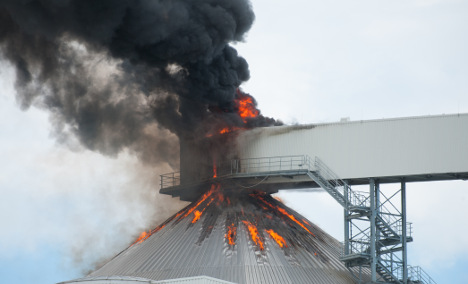 The fire in the 90-metre high silo belonging to Nordzucker in Uelzen, Lower Saxony, began on Thursday at 2.15pm and is being fought with police helicopters dropping water onto it.

The blaze started in a compartment at the top of the silo and 40,000 tonnes of sugar caught fire. No-one was injured, but police said there was a danger that the silo, which was only built last year, could completely collapse. Its roof has already fallen in.

Around 100 firefighters are taking part in the operation which will continue “for some time”, police said.

AZ Online reported the cause of the fire was as yet unknown.

Smoke from the silo which is near a railway line is causing delays and cancellations of trains between Hamburg and Hanover, Deutsche Bahn said.