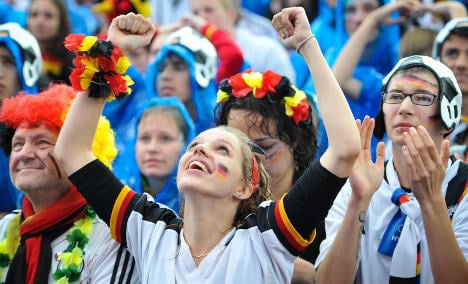 Every four years, Germans use the World Cup as a chance to collectively let their hair down. Wrapped in the flag and with their faces painted in the national colours, singing and cheering fans can be found everywhere.

Singing could lead to jail

But a judge in Berlin has told a group of male fans that if they do not keep the noise down, they could be fined up to €250,000 or go to jail.

The Tagesspiegel newspaper reported on Friday that the men must not step outside to "sing, roar or yell”.

The court also ordered the men to keep windows and doors closed "during games of the German national team until July 14th after 10pm."

A neighbour had gone to court when the group kept shouting the name of German midfielder Mario Götze after he scored against Ghana.

It was the latest step in a long-running neighbourhood dispute. Police had already been called to mediate in the dispute in the south Berlin neighbourhood of Rudow during Germany's first game against Portugal.

The order was based on a six-page summary of events. If the men appeal, the court could schedule an on-site visit before making a decision.

And the consumer protection ministry in the southern state of Baden-Württemberg said on Thursday it will expand its investigation into flag-coloured make-up sticks after finding some contained dangerous chemicals.

Thirty samples are to be tested after 14 products were pulled from stores. All of the make-up sticks tested by the ministry contained banned or undeclared substances, although there was no direct danger for customers, it said.

Investigators said they found "pigment red" in nine of the samples. The substance is thought to cause cancer and has been banned for use in cosmetic products since 1993.

Five samples included yellow pigments which investigators could not identify. The colourant required further research and was likely not approved by authorities.

Many make-up sticks also lacked an expiration date or information about the producer.

Nine of the tested samples were made in China, two in Poland. It was unclear where the others were produced, the ministry said in a statement on Thursday.