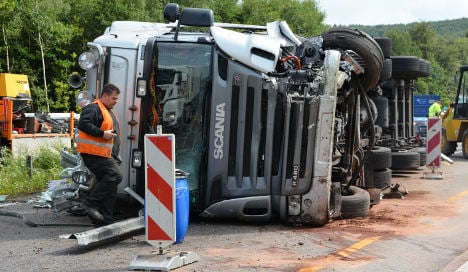 The truck rolled onto its side after a tyre burst. Photo: DPA

The crash happened in the early hours of Thursday morning on the A4 near Bad Hersfeld, Hesse.

Police said the driver lost control of his vehicle when a tyre burst. The truck broke through a crash barrier and came to a halt on its side in the opposite lane.

Tonnes of sweets, including gummy bears, mixed with diesel and spilled across the road. The A4 motorway remained closed in the eastern direction for the clean-up and one lane reopened at around 4.15pm after being closed since 2am.

“A large chunk of the sweets stayed in the truck rather than spilling across the motorway,” a police spokesman told The Local. “But they still had to be picked up piece by piece.”

The driver was slightly injured. Police estimated the damage to be around €170,000.