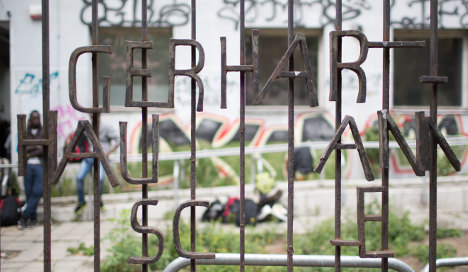 Protesters entered the embassy in Belgium as well as the local council building in Friedrichshain-Kreuzberg in Berlin to support the refugees at the Gerhart-Hauptmann-Schule.

The former school has been home to around 200 refugees since November 2012, but on Tuesday afternoon hundreds of police officers arrived to clear it. Most of the refugees left peacefully, but some are refusing to leave and the police operation has sparked wider protests.

Activist Emilie Scholten from expat volunteering group Give Something Back to Berlin told The Local: “When I spoke to some of the inhabitants of the school on Tuesday they were all very scared and did not know what was going on.

“The refugees had organized a solidarity concert in the school yard for 3pm on Tuesday and by around 11pm the police had blocked off all the roads and encroached onto the school. In panic some of the inhabitants spilled petrol all over the school and threatened to set it alight. Others threatened to jump off the roof.”

"Kreuzberg looked like a warzone. I've never seen so many police in my life and it concerns me that innocent people that have come to Germany to flee war and impossible situations are being deliberately confused and intimidated.”

Authorities are re-homing the refugees in Spandau and Charlottenburg and decided to clear the former school site after dozens of violent incidents.

One person was killed and several injured during clashes at the school over the last 18 months.

Berlin’s Senate says it wants to clear the building peacefully and around 190 of the 211 registered refugees in the school have been given accommodation elsewhere.

On Thursday two dozen activists protested inside the German Embassy in Brussels and were arrested by police. A spokesman for the foreign office said: “The unlawful protest was disbanded by Belgian police. No-one was injured and no damage was caused.”

A spokesman for the activists said the Brussels demonstrators were demanding that the refugees should be allowed to stay in Germany and were against the clearing of the Gerhart-Hauptmann-Schule.

And in Berlin around 30 sympathizers of the refugees forced their way into the Friedrichshain-Kreuzberg Bezirksamt building and occupied the office of district mayor Monika Herrmann for a short period.

SEE ALSO: Who's an expat and who's an immigrant?