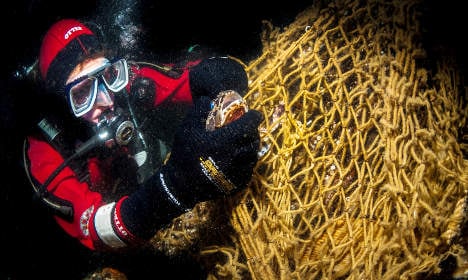 A diver rescues a sea scorpion from a net off the island of Rügen in the Baltic Sea. Photo: DPA

"For over 60 years plastic nets have been used to fish the sea," said head of the marine biology Archaeomare organisation Thomas Förster. "Unlike the earlier [rope] ones the nylon nets don't rot."

The nets, which can take up to 450 years to break down, get caught on ship wrecks where they collect rubbish and other debris and pose a serious danger to sea life, conservationists say.

"Especially when we dive in the winter months we find cod, flounder [a type of fish] and sea scorpions," said Förster. In colder weather animals seek shelter in the wrecks of boats where the and are caught by the nets, he added.

Förster, along with his marine biologist colleagues at the German Maritime Museum in Stralsund and the World Wildlife Fund (WWF) are now involved an extensive clean-up operation.

Over the past year, scientists have sent divers to 28 wrecks to collect the nets off the coast of Rügen, with new projects slated for elsewhere in the Baltic Sea.

The WWF estimates that around a tenth of the sea's rubbish – 640,000 tonnes – is caught in so called "ghost nets."

Around 5,000 to 10,000 nets end up in the Baltic Sea every year, said Jochen Lamp of the regional WWF chapter.