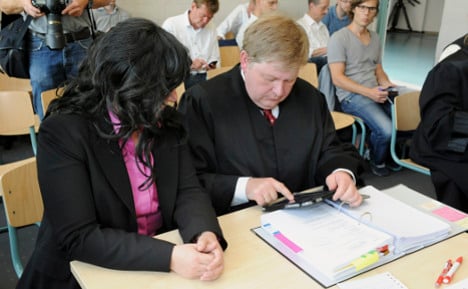 The woman at Darmstadt Labour Court with her lawyer on Thursday. Photo: DPA

The 42-year old woman from Darmstadt, Hesse, was told by Darmstadt Labour Court on Thursday that she could not expect financial compensation on grounds of discrimination as there had been no violation of equality laws.

She wanted to sue the company for not offering her a job after she went for an interview in 2012 for a managerial position.

The woman, who has not been named, believes the company, a health organization, rejected her for the job because of her size, and as a result she wanted €30,000 in damages.

"The job rejection was not liable for compensation," the judge told the woman who weighs 83kg and has a European dress-size of 42 (UK 16, US 14).

The court said it could find no evidence that the woman's lack of success in finding a job was due to being overweight.

During the case the judge frequently proposed an amicable settlement between the woman and the company. The 42-year-old, however, rejected the idea.

“I really cried,” she said after being turned down for the position. “It felt as if someone had hit me in the back of the neck with an axe.”

The woman's lawyer said they now intend to take the case to the Frankfurt Labour Court. “If we do not win this case, a similar case will never get off the ground,” the lawyer said.

Have you faced discrimination applying for jobs in Germany? Email [email protected]