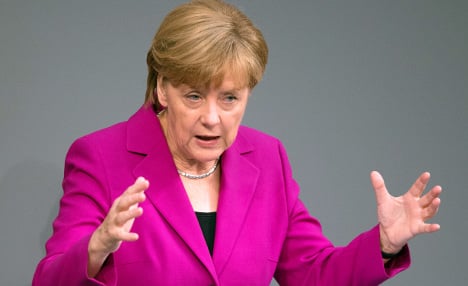 Merkel speaking before the Bundestag on Wednesday. Photo: DPA

"Germany remains the anchor for stability and driver of growth in the Eurozone and the entire European Union," Merkel said before the Bundestag.

She added the German economy was off to a good start in 2014 and GDP growth next year could reach two percent. But the chancellor also warned that the on-going European debt crisis and other global economic risk factors could affect businesses in Germany.

Opposition leaders used the debate over the chancellor's budget to attack Merkel and her coalition government.

The Left Party criticized the plan for a national minimum wage as insufficient. Its parliamentary leader, Gregor Gysi, called for a wage floor of €10 instead of the €8.50 the government has introduced.

Green Party co-leader Anton Hofreiter said the government wasted citizens' money and failed to use the country's full potential. "Germany will come out weaker under this government," he said.

And he warned the government's Energiewende – the ambitious plan to phase out nuclear and boost renewable energy – fell short. Germany could not remain a "coal country" and claim to be a pioneer for the use of renewables, Hofreiter said.