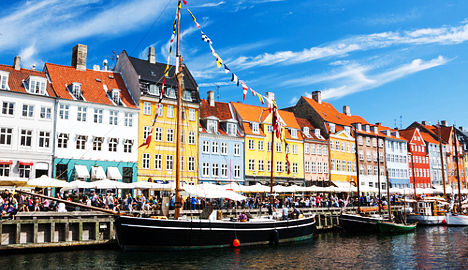 Earlier this year they attracted worldwide ire for public killings of zoo animals and in May they hosted the Eurovision song contest.

If you don’t speak Danish then chances are your knowledge of Danish news over the past year ends here.

But what else has been going on in Denmark recently?

Quite a lot, as it turns out.

Did you know, for example, that for the past week a debate has been raging over what seems like a very basic question: Is Denmark at war?

Or that on July 1st it will finally be illegal in Denmark to shoot your neighbours’ cats and dogs?

Meanwhile, The Local has spoken to the author of Denmark's statistical yearbook which offers an insight into the life of the average Dane and lists ten amusing Danish stereotypes courtesy of Google’s autocomplete function.

Bringing you these lesser-known but no less intriguing stories has become the mission of The Local Denmark’s new editor, Justin Cremer, who will head up the news team in Copenhagen. He will work alongside the site’s sales manager Kristian Hastrup Larsen.

“I’ve been covering Danish news for over three years, and there’s never been a more exciting time to write about Denmark than now,” says Cremer, who is the former news editor of the Copenhagen Post.

“Politically, Denmark is in an interesting place. The government’s unpopular welfare reforms have opened the door for the anti-immigration Danish People’s Party.

“Meanwhile, the country’s main opposition leader, once a seeming lock to return to power, has been plagued by scandal and there is constant speculation that PM Helle Thorning-Schmidt is ready to jump ship for an influential EU position.”

The Local Denmark follows hot on the heels of The Local’s Austrian edition, which launched in May, making it the news network’s ninth country edition.

CEO Paul Rapacioli says that The Local sees its physical presence in Denmark as an important milestone on the road to covering Europe’s news in English.

“Our particular format – local news in English from all around Europe – has become the benchmark in all of the countries we report from. So after ten years in Sweden I’m delighted that we are finally crossing the bridge into Denmark,” says Rapacioli, who founded The Local with Managing Editor James Savage ten years ago.

“In America we are seeing hundreds of millions of dollars being invested in new and original digital news brands. But in Europe, where the old newspaper titles still dominate, The Local is the only completely new international news brand to emerge since Metro. Our plan for covering Europe’s news in English is ambitious but we are making good progress.”

The Local started in 2004 as a weekly summary of Swedish news sent to foreigners in Stockholm and quickly grew to be the biggest English-language news site in Scandinavia.

So what are you waiting for? Check out the latest addition to The Local's network here. You can also follow The Local Denmark on Twitter and Facebook.