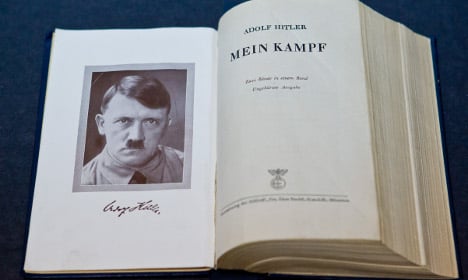 Regional and national German justice ministers met on Wednesday on the island of Rügen to discuss whether Germany should make a new law banning Hitler's National Socialist manifesto once the 70-year copyright term, which started in 1945, runs out.

Dieter Graumann, president of the Central Council of Jews in Germany told The Local he would strongly oppose ever publishing the work.

"The very thought of a new publication of Hitler’s ‘Mein Kampf’ is more than disgusting and goes against all my beliefs to fight neo-fascism and right-wing extremism," said Graumann.

"This book was and will remain a pure anti-Semitic work of irrational hatred that should be forbidden for evermore. It is an abhorrent pamphlet full of incitement of the Jewish people and it brutally hurts the feelings of the Shoa-survivors."

The current copyright holder is the state of Bavaria, which took over rights after Hitler's death at the end of World War II. But after 2015, 70 years after the author's death, theoretically, anyone can print and sell the book.

The Bavarian state does not allow the book to be printed in Germany and Austria, but has previously indicated it may allow an annotated edition for academic use after the copyright runs out.

But Bavaria's Justice Minister Winfried Bausback said in a statement on Wednesday: "We owe it to the victims of the holocaust and their relatives to do everything we can to prevent the duplication and distribution of this ideological, inflammatory text."

"I would prefer this book to be forbidden forever. Regrettably and obviously we cannot prevent a new publication, since the copyright is about to expire by the end of the year 2015," added Graumann.

“So if a publication cannot be avoided, it should be at least guaranteed that there is a scholarly edition which provides a scientific and critical analysis in order to demystify this horrible text.”

Many fear that the end of the copyright could open the flood gates to neo-Nazi editions of the work – and to the unthinkable prospect of the long-banned work becoming a bestseller in Germany.

"Mein Kampf," in which Hitler outlines his vision of a Jewish global conspiracy is widely available abroad, and has been translated into 16 languages, with several editions having been printed after 1945.

An e-book version of the work, topped Amazon’s bestseller charts earlier this year.

Lower Saxony's Justice Minister Antje Niewisch-Lennartz said at the start of the ministers’ conference she believed an explicit legal ban on printing and distributing the work is not the answer.

The Green Party politician said instead that Germany should allow the work to be published with an academic commentary so the anti-Semitic text could have a “preventative effect” against fascism.

Niewisch-Lennartz acknowledges that for some Jewish groups the idea of putting the work back on sale in Germany would be "almost unbearable".

But she said a specific legal ban on the book would not work – especially as it was available "on practically every corner" abroad and online.

After Hitler's rise to power, millions of copies were published. From 1936, the Nazi state gave a copy to all newlyweds as a wedding gift.

Ten million copies of the work were thought to be in German households in 1943.