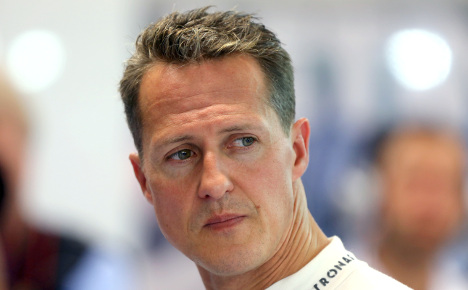 Schumacher's manager Sabine Kehm said on Tuesday documents belonging to the German Formula One legend, who was moved to a Swiss clinic last week following a ski accident, had been stolen.

“It's outrageous and disgusting,” Kehm told Bild newspaper on Tuesday.

Schumacher's former hospital in Grenoble, France, reported the possible theft of the 45-year-old's medical records, after they were informed by his manager.

Without knowing the content of the documents, the clinic filed a report for theft and violation of medical secrecy, the university hospital said on Tuesday.

“We cannot say if the files were authentic. However, the fact is that the documents were stolen and the theft has been reported to the police,” Kehm said.

According to the Bild, the seller has asked for a minimum price of €50,000 in exchange for the documents.

"We have explicitly pointed out that the purchase and publication of such documents/data are banned," Schumacher's manager said in her statement.

"Data from medical records is highly confidential and should not be available to the public.”

She added the family would press for “criminal charges and damages” if the documents are made public.