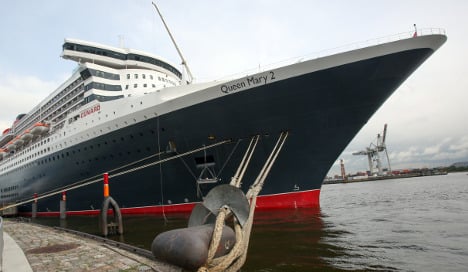 The inebriated skipper steered his boat so close to the 76,000-tonne liner that it raised the ship's alarm. The unnamed man's tiny speed boat showed up on the radar screen, alerting the attention of the crew, the Bild newspaper said.

"The skipper was absolutely unfit to drive. We've initiated proceedings against him for drunkenness whilst steering a boat," police spokesman Andreas Schöpflin told the Bild newspaper.

Hamburg water police arrived soon after to attend to the 37-year-old skipper and his friend. They were brought to safety at the Wedel container terminal, where the skipper was breathalyzed.

“I was in my boat with a buddy, we were on our way to accompany the Queen Mary 2. I've done it loads of times before,” he told the Bild.

The huge cruise liner was travelling at more than 15 miles per hour out of the harbour, heading for Southampton in England. Even in an emergency, the 345-metre-long ship has a 100-metre stopping distance.