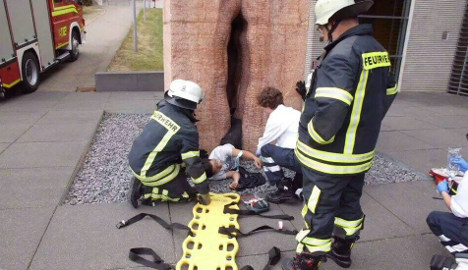 Thought to have climbed in for a dare on Friday afternoon, the exchange student got his legs trapped inside a giant marble vagina sculpture, which has stood at the Schnarrenberg Institute for Microbiology and Virology in Tübingen for the past 13 years.

When the man found he could not free himself, fifteen of his friends tried to intervene to pull him out.

When they failed, they called the emergency services. In the end a total of 22 firemen in five fire engines were deployed to help the American out again, the Schwäbisches Tagblatt reported.

An ambulance was also sent out to the young man, but medical intervention was not needed.

He was eventually pulled unharmed out of the cavity “by hand, without the use of any equipment,” emergency services told the paper.

The €120,000 sculpture was created by Peruvian artist Fernando de la Jara and represents the female form as a gateway to the world.

The artist named his work “Pi-Chacan” meaning “making love” in a Peruvian dialect.

The artwork was not damaged during the incident.