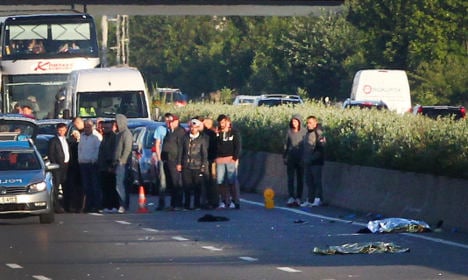 The A4 motorway was temporarily closed on Monday after the incident. Photo: DPA

The man began his knife rampage in the early hours of Monday morning, said police, when he got into a taxi in Heerlen, Netherlands and asked to be taken 20 kilometres across the German border to Aachen.

When asked to pay his fare at the end of the journey, the man stabbed his driver, seriously injuring him, before fleeing the scene, said police.

A few streets away the man is believed to have approached and demanded money from a resident who was getting into his car.

"When he didn't give it, he stabbed him several times, seriously injuring him," said Jost Schützeberg, spokesman for the state prosecutor in Aachen.

Then the man got into another taxi and asked to be taken to Cologne – a journey of 100 kilometres. On the way he asked the driver to stop at a service station.

But when the man got out the taxi driver sped off, having been warned of the danger on his radio.

The suspect then attacked again, this time a truck driver who was resting in the services car park. The driver was very badly hurt and is now in a life-threatening condition, said the prosecutor.

Finally, the man attempted to cross the A4 motorway on foot, said Schützeberg, but was hit and killed by a passing car.

Dutch police are now cooperating with German authorities to find out the man's identity, background and possible motives.