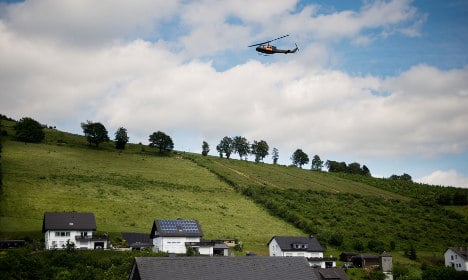 A German air force helicopter flies over the site of the accident. Photo: DPA

Two people are feared dead after their aircraft collided with a Eurofighter jet during an exercise they were both taking part in over central Germany on Monday, officials said. The German military jet and a second Eurofighter taking part in the exercise were able to land afterwards at an air base near Cologne.

Prosecutors are now investigating the pilots of the two fighter jets involved on suspicion of involuntary manslaughter through negligence, a police spokeswoman confirmed on Tuesday.

The second body of the two people aboard the military-chartered Learjet was still missing on Tuesday morning after the small plane crashed in a hilly rural area close to several homes and burst into flames. At least one of the unnamed passengers, aged 50 and 43, both from the northern state of Schleswig-Holstein, was confirmed killed in the crash, police said.  Body parts were found near the site of the accident, which police said is difficult to access.

The search for the second body was called off at around 2.30am and resumed on Tuesday morning.

The planes hit each other at a height of around 2,500 metres at 12.40pm on Monday in the Olsberg-Elpe district of North Rhine-Westphalia. The impact tore off a full fuel tank from one of the Eurofighters, which were both able to land afterwards at an air base near Cologne.

The Learjet fared much worse off, losing one of its engines in the crash, which fell down onto a road below. The aircraft itself crash-landed in a wooded area just 90 metres away from a house.