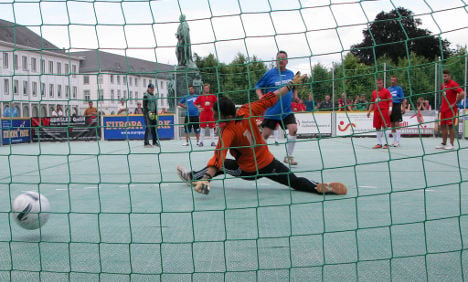 Four-a-side street football is about tight passing and speedy reflexes. After all, with a pitch which measures 22 by 16 metres, it's a hard and fast game. But then, so is living rough.

“I sell a homeless magazine,” explained Christian from behind the goal where he was waiting to be substituted onto the pitch. “People completely ignore me and it makes me feel not I'm not worth anything.”

But football is different, he said.

The forty-four-year-old is captain of Ocker Beige Berlin, one of 22 teams which took part in the annual German Homeless Cup held this weekend in Karlsruhe. Some 200 homeless people, street paper vendors, addicts in rehab programs and asylum seekers travelled to Karlsruhe for the two-day national competition.

Although he has an apartment now, Christian spent 13 years sleeping rough, a time when he said it was difficult keeping up friendships.

Most of all, he said he likes being part of the team and having a sense of camaraderie. “For me, that's more important than winning or losing.”

Zakari Shahadu, on the other hand, said he was deadly serious about winning. The goalkeeper for Hamburg's Jugend Hilft Jugend was in luck – his team, the defending champions from 2013, also took the title this year after a ferocious final.

A construction worker by trade, Shahadu left Ghana five years ago to work in Libya and suddenly found himself in the middle of a civil war. After a hazardous journey across the Mediterranean to Lampedusa he reached Hamburg, where he has no papers, no work and nothing to do – except play football.

Training with his homeless team brings him happiness, he said, because it gives him “a chance to laugh”.

“People in our projects can't just walk into a sports club and say, 'Hi, I want to play on your team',” she explained.

“The advantage of football compared to other sports is everyone knows how to play (or thinks they know how to play) and you only need a ball so it's easy.”

All the teams are part of social projects, which means members train and travel with social workers.

But players want to be seen as sportsmen, not as walking social problems. In October, eight players from the Karlsruhe cup will be selected to travel to Santiago for this year's Homeless World Cup, which has been held every year in a different country since 2003.

Unfortunately, the German national homeless team aren't quite as successful as their professional counterparts currently battling it out at the World Cup in Brazil. Last year in Poland, they finished 32nd out of 45 teams and the year before in Mexico, they came seventh from last.

But being the best isn't the point, said national homeless team trainer Jiří Pacourek, who scoured this weekend's tournament for talent. It's his job to pick the team but he doesn't judge on sporting ability alone.

“I'm not looking for a new Ronaldo, but for someone who really enjoys the game and importantly, plays fair,” said Pacourek, and said he also talks to social workers about whether individual players are currently getting their life together, to find out who could really benefit from the trip.

Pacourek himself knows first hand about the potential healing powers of football. A gambling problem meant he ended up sleeping on the streets for two years. Once he entered rehab, his love of football returned and he joined a team.

In 2010, he was selected for the German team to play in the Homeless Cup in Rio.

“Oh God, I couldn't believe it when the trainer asked me,” he said. “I had to ask him to repeat his words again to make sure I didn't misunderstand him.”

And the 14 days in Brazil turned out to be a life-changing opportunity. As well as being the first time he'd ever flown in a plane or swum in the ocean, just being selected gave him back his self-belief and determination to make something of his life.

Four years later, Pacourek is working as a project manager for a social welfare group in Nuremberg.

One of his favourite memories, though, is kicking the ball around with others from the Homeless World Cup.

“We went to the Copacobana and there were sixteen of us from all these different countries kicking the ball to each other,” he remembered. “Football can change people.”