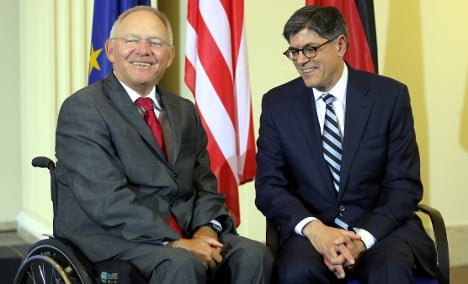 "More can be done in both the USA and Europe to strengthen growth and job creation, particularly through efforts to boost public and private investment," Lew told a joint press conference after holding talks with Wolfgang Schäuble.

"Greater investment would help generate much needed demand in the near-term while also supporting longer-term growth potential," he said in the German capital, after earlier stops in the United Arab Emirates, Saudi Arabia and Israel.

Schäuble, Germany's conservative veteran finance minister who is a strong defender of budgetary rigour, said that investment did not only have to be via public funding.

Both Schäuble and Lew indicated agreement on the importance of pushing ahead with negotiations to seal an ambitious transatlantic free trade pact between the European Union and United States.

On Lew's last visit to Berlin in January, he called on export powerhouse Germany to spur demand at home to help revive European growth.

"But we agree there needs to be a balance between short-term and long-term steps."

And amid a debate over granting some EU members more leeway under the EU's strict fiscal rules, Schäuble reiterated comments by Chancellor Angela Merkel that the Stability Pact already contains enough flexibility.

He said that success in overcoming recession in the eurozone had shown "that we have been successful with this European stabilization policy."