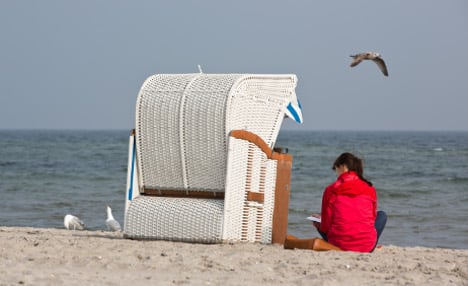 On the beach at Kiel. Photo: DPA

Way back when, when SG was but a brand new flickering flame of romance, my flatmate said to me upon meeting him, "he is a typical north German."

I didn’t quite know what that meant because I didn’t know any other north Germans, just a lot of Westphalins. I simply thought, "if by typically north German you mean wonderfully handsome, then how marvellous."

When talk of visiting Kiel sprung up among my Westphalin friends, they spoke of the famous aloofness the northerners possess, the arm’s length they hold you at. Once or twice, I seem to recall, the word "cold" popped up.

At the time, I was struggling with the Münsteranian arm’s length, the lack of hellos to passersby – I had visions of arriving in Kiel and being frozen to an ice chip by averted gazes, being cowed by a whole new level of German directness, gasping for air in conversational vacuums.

Over the years, due to moving around the country a bit, and cohabiting with a typisch Norddeutsche, I have come to appreciate what being a ‘typical north German’ means – direct, self deprecating, funny, and cheery.

Yes, cheery. Schleswig-Holsteiners are happy people, they ranked as the most content Germans last year – I suspect it is the sea air.

They are energized by innovation and by projects that focus on communities. And they love the north, protecting their borders with the same vigour all Germans protect their regions and all they contain. They also love holidaying in Denmark, but that’s a different story for a different day.

One thing about northern Germans that became very clear very early on is that they don’t waste words. Perhaps this tendency to say things as succinctly as possible, or indeed in as few words as possible, could account for their reputation of über-directness.

Most Germans are, when push comes to shove, direct, but some regions are chattier than others, padding out conversations and interactions with the type of conversational fat I am more used to. The Oberpfälzers, for example, could talk under wet cement.

The northerners, however, have no interest in conversational padding. They have their own brand of directness that seems to spring from a desire to make themselves understood as quickly and effectively as possible.

Indeed, you can have an entire conversation by simply employing three key words – Moin, jo!, mmmm. The latter isn’t even a word – this is the level of conversational efficiency we are dealing with.

"Moin" is the only greeting you need in the northern parts of Germany – Northern Friesland, Schleswig-Holstein, Bremen, Hamburg, and MeckPomm – and you will have it bounced at you by all and sundry regardless of time of day and the formality (or informality) of the situation.

Often, when one is greeting friends or family, "moin" is followed up with "naaaa?" which roughly translates to "how’s it going" and can be responded to with a counter "naaaa?".

North Germans enjoy a good handshake, so the classic greeting will encompass a firm handshake while the "moin" is being passed back and forth. One has the choice of responding to a "moin" with a "moin moin" although only if you really feel the situation calls for it.

A little research reveals that "moin" also pops up in the east and north of the Netherlands, in Denmark’s Southern Jutland and despite its apparent connection to "morgen", it actually more than likely springs from the East Frisian word mōi, which means good or lovely.

Often, I will write SG a text containing some detailed information, not lacking in verbosity, and he will respond with a merry, "jo!" (pronounced, naturally, "yo!"). Just one word.

Or, a transaction in a shop will begin with a crisp "moin" and end with a rally of "jo!" being volleyed back and forth between the guy slipping the purchase into a bag and the customer tucking his wallet back into his pocket.

This peppery little syllable is most often used as confirmation, but can also make an appearance as a greeting, particularly when answering the phone to a pal, and also to wrap up a conversation.

Where we might get trapped in the endless cycles of, "okay then, alrighty, good, yep, okay then, sounds great, stay in touch, I will too, take care, yes I will too, okay I’ll pass it on, yep, good, chat soon, yep, yep, byeeeeeee", the northern Germans snap out a fizzy "jo! Tschüss" and end the conversation there and then.

This is a key one to master, because if left misunderstood, the "mmmm" can wound an English speaker, crippling their confidence in the hitherto-believed affectionate friendship. I first encountered the "mmmm" with SG’s mum and left the house certain she despised me.

What else could account for a conversation ending with an "mmmm"? And an "mmmm" uttered, no less, with a slight chin-led nod with nothing following.

Say "mmmm" to an English speaker and we think you’re deep in thought and will soon deliver your opinion on the given conversational topic. We’ll wait for you to say something, to weigh in.

But here, the "mmmm" isn’t an indication the person you’re having coffee with is thinking about what you’ve just said, it’s more likely they’re bringing that chapter of the conversation to a close. "Mmmm" very often means "right. Okay then. What’s next on the agenda?" It isn’t a filler while you ponder, it is a punctuation mark.

"Mmmm" can also be used to signal a world of disapproval, in which case there is a slight tonal difference to the "mmmm" that signals a subject change. The disapproving "mmmm" hangs in the air, it withers nearby plants.

Sometimes an additional syllable is added to the "mmmm" and it becomes "mmhmm" and that generally signals simple comprehension and may precede some questions on the matter. This is the least terrifying of the "mmmms."

Liv Hambrett is an Australian blogger and writer living in Kiel. You can read more from her blog here or check out Liv’s book, ‘What I know about Germans’. If you would like your blog to feature on Expat Dispatches email [email protected]