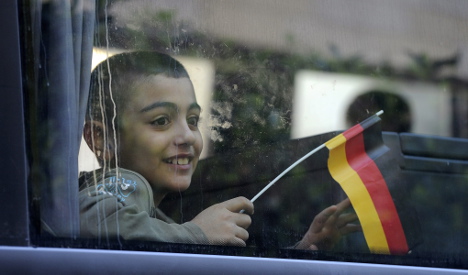 A Syrian boy in Lebanon before flying to Germany. Photo: DPA

Despite the government's plan to make changes in the asylum law for refugees from the Balkan countries, Germany granted asylum to 19.3 percent of the 135,700 successful asylum seekers in the EU in 2013.

Asylum seekers from Afghanistan were the second largest group in Germany at a total of 5,005 (20 percent). The third biggest group was from Iran at 2,720.

But of the 76,165 people who applied for asylum in Germany, just 20,125 (26 percent) were granted protection first time, putting Germany below the EU average of 34 percent. Another 5,955 were given asylum on appeal.

And when ranked per head  of population Germany's figures are less impressive. They take in 31 refugees per 100,000 people compared with 385 in Malta and 278 in Sweden.

The statistics were published by Eurostat, the statistical office of the European Union, on Thursday.

Last week Germany agreed to take in another 10,000 refugees from Syria.

"Germany stands by its humanitarian responsibility. It is therefore right that we, together, help even more," Interior Minister Thomas de Maiziere said in the statement.

SEE ALSO: Who's an expat and who's an immigrant?