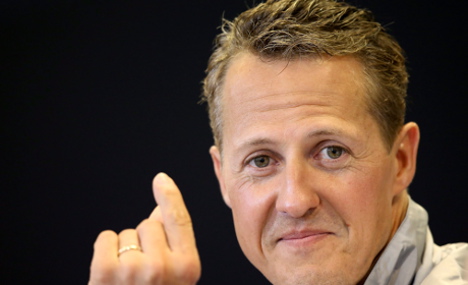 The ambulance was operated by Sanitätoberwallis, a company based in Visp in the canton of Valais, the Blick newspaper reported online on Wednesday.

“I can confirm that we carried out the drive to transfer [Schumacher] on Monday,” Matthias Volken, medical superintendent of the company, told the newspaper.

Blick reported that the crew who picked up Schumacher, 45, from Grenoble were not told ahead of time who the patient was.

After 170 days in the Grenoble hospital, where the German racing legend was put into a coma to deal with head injuries from a skiing accident at the Méribel resort in the French Alps in December, Schumacher has apparently lost a lot of weight, Blick said.

But he was conscious during the 200-kilometre trip in the ambulance and communicated with the crew by nodding his head, the newspaper said.

His eyes were open for long periods during the trip.

International media descended on the CHUV hospital earlier this week after news emerged of his transfer there.

Medical experts have suggested Schumacher faces a difficult road ahead, with one Swiss expert predicting he will remain an invalid for the rest of his life.

However, precise information about Schumacher’s condition remains a well-guarded secret. German tabloid Bild reported earlier that the former race driver had “interacted” with members of his family and doctors.

The newspaper reported, however, that the 1.74-centimetre tall Schumacher has lost 20 kilograms and now weighs around 55 kilograms.

Schumacher’s move to Lausanne brings him close to his home in the town of Gland, located between the Vaud capital and Geneva.