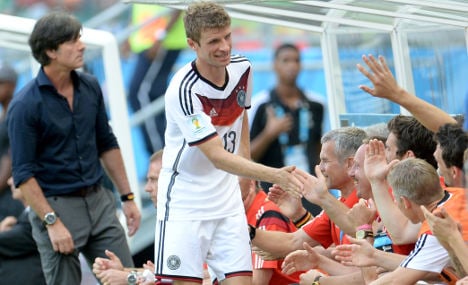 Thomas Müller claimed the first hat-trick of these World Cup finals in Monday's 4-0 drubbing of Portugal in Germany's Group G opener in Salvador.

The Bayern Munich star, 24, is normally deployed as a winger or attacking midfielder and has only made rare appearances as striker for either club or country.

But the gangly Müller repaid the faith of head coach Joachim Loew with an impressive display as a striker against Portugal, which led to Maradona – who almost singlehandedly inspired Argentina to the 1986 World Cup trophy – dubbing him 'El Flaco'.

"He has no muscles, but today he tore them (Portugal) apart," an impressed Maradona, who knows a thing or two about goal-scoring, told Venezuelan television.

The goal-scoring exploits of stocky 1970s star Gerd Müller are legendary amongst Germany fans, but his younger namesake currently has his football-mad country swooning.

He finished his career with an incredible 68 goals in 62 internationals and the younger Müller is producing similar impressive statistics with 20 goals in 50 internationals.

"The lad's fast, he's got a good technique – he's going to be a great player," Gerd Müller said.

While the Portuguese captain is renowned for his personal grooming and showing off his finely-honed torso in his goal celebrations, Müller has a touch of the boy-next-door.

"It's his unorthodox playing style that characterizes Thomas Müller," ex-Germany captain Oliver Kahn told braodcasters ZDF. "Sometimes he doesn't know himself exactly what he's going to do. There's a lot of intuition involved, he always knows where he has to run.

"His body language is very important, he makes a strong impression and says 'we want to be world champions' – I like that.

Müller's self-confidence was clear as he picked up where he left off at the 2010 World Cup – his break-through tournament – when he finished joint top-scorer to claim both the Golden Boot and best young player awards in South Africa.

"He's a light-hearted, cool guy," enthused German FA president Wolfgang Niersbach. "He says before the tournament that he would again like to be the World Cup's top-scorer – then he goes and scores three goals. He's relaxed and determined at the same time."

But Löw said Müller's unorthodox runs are an asset which leaves defences guessing the Bavarian's next move.

"He is a very unorthodox player and you can't really predict his lines of running, but he has one aim and that is 'how can I score a goal?'", said Löw. That makes him so dangerous, especially in the box."